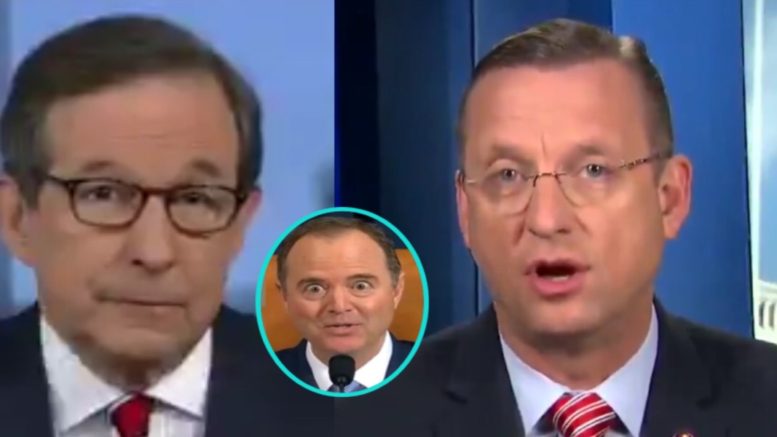 This comes as the Judiciary Committee announced last week that it would hold a hearing with constitutional scholars on December 4 to discuss the “historical and constitutional basis of impeachment.” Ultimately, the committee will be responsible for recommending articles of impeachment that the full House will vote on.

Chris Wallace asked Rep. Doug Collins on Sunday, “Will Republicans on the committee call for subpoena witnesses to testify, and if so, who are you going to ask to testify?”

“And if we go back to [Bill] Clinton and even [Richard] Nixon– but in Clinton, Ken Starr was the special counsel. He presented a report that we are gonna get in the Judiciary. He actually testified under oath and took questions from all sides, including the White House. My first and foremost witness is Adam Schiff,” the Georgia Congressman said.

“So you want to bring him in before the committee, not just to present a report, but to take questions from Democrats and be cross-examined, if you will, by the Republicans?” Wallace asked. (Continued Below)

“But it’s gonna be another thing to actually answer questions about what his staff knew, what he knew, what he knew about the whistleblower report, the interactions he’s had with Ukraine, the other things he’s had overtime in this process. And also why he still has not released documents to our committee and reports to our committee,” Collins continued.

“Why are they hiding this stuff from us? If they think they have such a case, give us all the materials and don’t let Jerry Nadler write a crazy letter that says ‘On the 6th, let us know who your witnesses are.’ We don’t even have the information from Intel Committee yet. This is why this a problematic exercise, and simply a made for TV event coming on Wednesday,” he added. (Video Below)

The House Intelligence Committee on Monday will begin reviewing a draft report of its investigation into allegations that President Trump pressured Ukraine to investigate his Democratic rivals. The committee will then hold a business meeting on Tuesday to consider and adopt the report, before sending it to the House Judiciary Committee, as reported by Axios.

House Judiciary Chairman Jerry Nadler (D-NY) has invited President Trump and his legal counsel to attend the hearings, but the president has not indicated whether he plans to do so.

It’s easy to hide behind a gavel. Adam Schiff needs to testify in Judiciary, answering questions from Democrats, Republicans, and the White House—just like Ken Starr did.

This is crucial since Schiff has refused to share evidence that all House Members should be able to see. pic.twitter.com/DoUoBIUU2m

(Related: In Another Letter, Nadler Sets A Deadline For Pres Trump To Decide If He Wants To Participate In The Formal Impeachment Hearing)