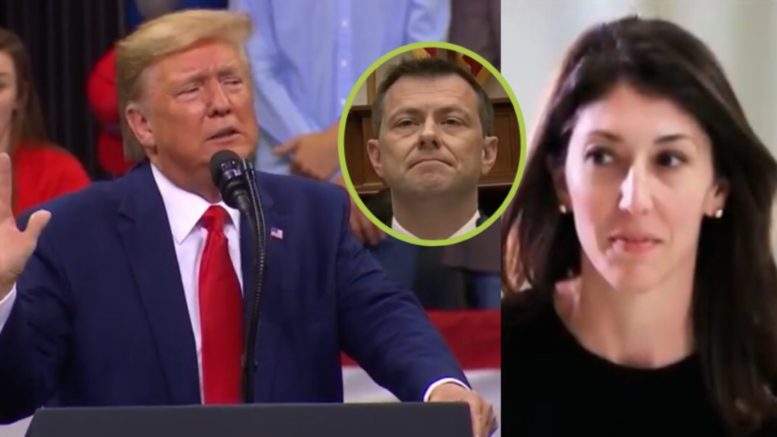 Former FBI lawyer, Lisa Page, sat down with the Daily Beast’s Molly Jong Fast to give her first interview ahead of the release of the Justice Department’s Inspector General FISA report.

In her interview that was released Sunday, Page says she’s “done being quiet”, and told The Daily Beast that she finally decided to speak out after the President acted out a fake orgasm to mock her texts with Peter Strzok during an October rally in Minneapolis.

Lisa Page is speaking up because President Donald Trump mocked her and Peter Strzok during a rally:

The Daily Beast’s Molly Jong Fast: I asked her why she was willing to talk now. “Honestly, his demeaning fake orgasm was really the straw that broke the camel’s back,” she says. The president called out her name as he acted out an orgasm in front of thousands of people at a Minneapolis rally on Oct. 11.

“I had stayed quiet for years hoping it would fade away, but instead it got worse,” Lisa said. “It had been so hard not to defend myself, to let people who hate me control the narrative. I decided to take my power back.”

Lisa Page denies any wrongdoing: “…it’s also very intimidating because he’s still the president of the United States. And when the president accuses you of treason by name, despite the fact that I know there’s no fathomable way that I have committed any crime at all, let alone treason, he’s still somebody in a position to actually do something about that. To try to further destroy my life. It never goes away or stops, even when he’s not publicly attacking me.” (Continued Below)

Lisa Page doesn’t believe she did anything wrong: She is convinced that she’s followed the rules. She is, after all, a lawyer and knows that she is a restricted employee under the Hatch Act and can’t engage in partisan political activity. Molly’s logic here is hysterical, amounting to “Lisa Page wouldn’t have done anything wrong because she knows that laws exist.” Page concurs, that ” I know I’m a federal employee, but I retain my First Amendment rights. So I’m really not all that worried about it,” as reported by Bongino.

Page also likened President Trump’s attacks on her to being punched in the gut. “My heart drops to my stomach when I realize he has tweeted about me again. The president of the United States is calling me names to the entire world. He’s demeaning me and my career. It’s sickening,” she said.

Molly Jong Fast: One thing becomes quickly apparent talking to Page: What really upset her, what still devastates her, was not the end of her extremely promising career at the FBI, but instead what Trump has done to the FBI itself. (Continued Below)

“It’s very painful to see to places like the FBI and the Department of Justice that represent so much of what is excellent about this country, not fulfilling the critical obligation that they have to speak truth to power,” [said Page.] “The thing about the FBI that is so extraordinary is that it is made up of a group of men and women whose every instinct is to run toward the fight. It’s in the fiber of everybody there. It’s the lifeblood. So it’s particularly devastating to be betrayed by an organization I still care about so deeply. And it’s crushing to see the noble Justice Department, my Justice Department, the place I grew up in, feel like it’s abandoned its principles of truth and independence.”

President Trump responded on Twitter Monday to Lisa Page’s interview after she denied any wrongdoing:

“When Lisa Page, the lover of Peter Strzok, talks about being ‘crushed’, and how innocent she is, ask her to read Peter’s ‘Insurance Policy’ text, to her, just in case Hillary loses. Also, why were the lover’s text messages scrubbed after he left Mueller? Where are they Lisa?” the Commander in Chief asked.

When Lisa Page, the lover of Peter Strzok, talks about being “crushed”, and how innocent she is, ask her to read Peter’s “Insurance Policy” text, to her, just in case Hillary loses. Also, why were the lovers text messages scrubbed after he left Mueller. Where are they Lisa?

Page was thrust into the public eye in December 2017 when the Department of Justice released hundreds of text messages between her and Peter Strzok, which showed the pair mocking President Trump and his supporters– calling the then-candidate a “disaster.”

Strzok was the lead investigator into Russian interference in the 2016 presidential election and Hillary Clinton’s use of her personal email server. Page resigned from the department in May 2018. Strzok was demoted to the FBI’s Human Resources Division after their anti-Trump texts came to light.

Rep. Jim Jordan chimed in and tweeted: “Let me get this straight. Page and Strzok sent texts about an ‘insurance policy’ and how they’ll ‘stop Trump’ while part of the FBI spying on Trump campaign. Now Lisa Page is blaming the President. 1 week before Horowitz’s FISA report.”

Let me get this straight.

Page and Strzok sent texts about an “insurance policy” and how they’ll “stop Trump” while part of the FBI spying on Trump campaign.