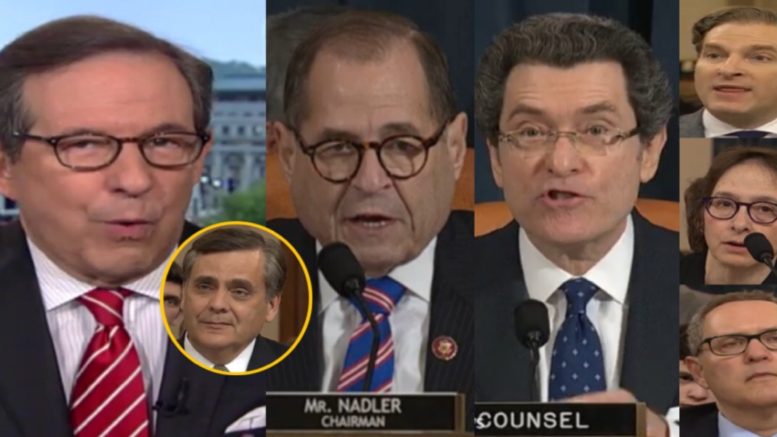 Fox News’ host Chris Wallace observed during Wednesday’s questioning from the Democratic counsel to the four “Constitutional scholar witnesses”, who testified in the House Judiciary Committee amid the impeachment inquiry against President Donald Trump, that something didn’t seem right.

He noticed specifically during the 45 minutes of questioning from Democratic counsel Norman Eisen, that the allotted time he used to question the witnesses, Eisen only inquired one question of the GOP witness, Jonathan Turley.

“There were four very distinguished law professors, who each represented their views. And then, the Democrats in the majority counsel, Norm Eisen, had 45 minutes. And if you noticed, he talked to three of them for about 44 minutes and 30 seconds. And only once, did he ask Jonathan Turley any questions,” Chris Wallace pointed out.

“Then he asked him about a specific quote that he had given in an article and he read the quote, and said, ‘Did you say that?’ Which was somewhat critical of President Trump and one of the things that Turley said doesn’t have to be completed for something to be an impeachable crime. And Turley started to give an answer and Eisen said, ‘No, no, I just want to know, yes or no. Did you say that?’ [Turley] said, ‘You read it accurately,'” Wallace continued.

“The point is: why are you talking to the three and not the other? Because the Democrats, who have the majority, called three Democratic, pro-Trump impeachment law professors and they wanted to focus on them. And they didn’t want to hear anything from Jonathan Turley, who was the one lawyer whose been called by the Republicans. So, this was not a search for justice or wisdom, this was a search for trying to make a case,” Wallace explained. [Emphasized].

“And Jerry Nadler, the chairman and his chief counsel, Norm Eisen, they wanted to hear from the people who were gonna make the case for them. They did not want to from Jonathan Turley, who was not gonna make that case,” he added. (Video Below)

(Related: Professor Karlan Puts Her Aggravation With Rep Collins On Full Blast: “I’m Insulted By The Suggestion That As A Law Professor, I Don’t Care About Those Facts”)