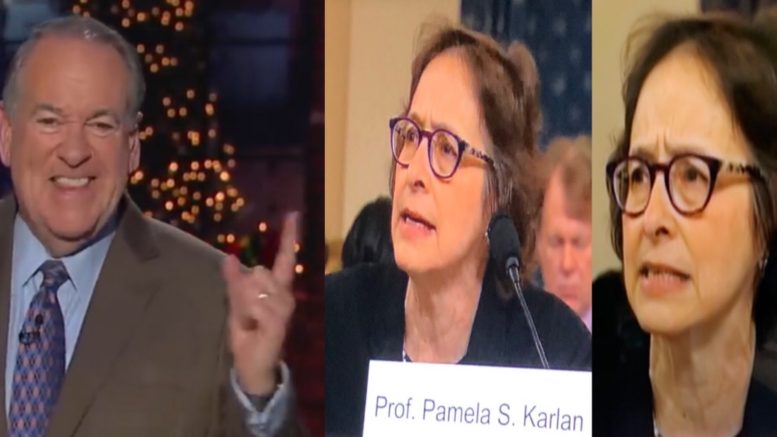 During her opening, Karlan told House lawmakers that President Donald Trump “must be held to account” for his actions related to Ukraine and declared that he has committed impeachable offenses.

“What has happened in the case before you, is something that I do not think we have ever seen before: a president who has doubled down on violating his oath to ‘faithfully execute’ the laws and to ‘protect and defend the Constitution,'” Pamela Karlan claimed. “The evidence reveals the president used the powers of his office to demand that a foreign government participate in undermining a competing candidate for the presidency.”

Karlan further expressed her outrage over then-candidate Donald Trump’s joke he made during a 2016 rally where he said, “Russia if you’re listening, I hope you’re able to find the 30,000 emails that are missing,” pertaining to former Secretary of State Hillary Clinton’s emails that were deleted, scrubbed with Bleachbit, and blackberry phones that were smashed with hammers.

“Saying Russia if you’re listening… you know, a president who cared about the Constitution would say, ‘Russia if you’re listening, butt out of our elections. And it shows a president who did this to strong-arm a foreign leader into smearing one of the president’s opponents in our ongoing election season. That’s not politics as usual, at least not in the United States or not in any mature democracy,” Karlan claimed, but she failed to mention that he was a presidential candidate, not a president at the time.

Hillary Clinton, however, during an interview in May with MSNBC’s Rachel Maddow, said on live TV, “China, if you’re listening, why don’t you get Trump’s tax returns?” (Continued Below)

It has been reported that Pamela Karlan donated $1000 to the presidential campaign of Sen. Elizabeth Warren (D-MA) in July, according to Federal Elections Commission (FEC) data.

In April, Warren was among the first presidential candidates to call for President Donald Trump to be impeached, in the wake of the release of Special Counsel Robert Mueller’s report on “Russia collusion.” Though Mueller found no evidence of collusion between Russia and the Trump campaign, Warren said Trump deserved to be impeached for allegedly obstructing the investigation.

In 2013, during President Barack Obama’s second term, Karlan was considered a possible Supreme Court nominee. Former Department of Justice attorney J. Christian Adams wrote at the time that Karlan “provides intellectual fuel for the most fringe elements of the progressive legal and political machine,” accusing her of “scholarly lies,” saying she “falsely attacked the Bush administration’s Justice Department for not protecting racial minorities,” Breitbart reported. (Continued Below)

Fox News’ Laura Ingraham tweeted a picture of Karlan with an angry face that she made during her opening statement and noted that she donated $1000 to Sen. Elizabeth Warren. Huckabee retweeted Ingraham’s post with the picture of Karlan and wrote, “Well, that little fact sure explains a lot about her anger and partisanship.”

Then, Lori Hendry tweeted, “Professor Karlan outraged by Trump’s joke ‘Russia if you’re listening’ but Hillary Clinton suggesting on MSNBC: ‘China, if you’re listening, why don’t you get Trump’s tax returns?’ was a joke. #ImpeachingHearings”.

Huckabee responded to Hendry, “And w/ every minute of this hearing crap, @realDonaldTrump is gaining votes for his landslide victory in 2020. Thank you Dems, for being DIM…and DULL.” (Continued Below)

Well, that little fact sure explains a lot about her anger and partisanship. https://t.co/4IeNuFPlDk

And w/ every minute of this hearing crap, @realDonaldTrump is gaining votes for his landslide victory in 2020. Thank you Dems, for being DIM…and DULL. https://t.co/Gn12ChkPk2

Imagine if a Democratic 2020 candidate said: "China, if you're listening…"

Just saying that shows the absurdity of the situation we find ourselves in. pic.twitter.com/qyC9fIkHe8