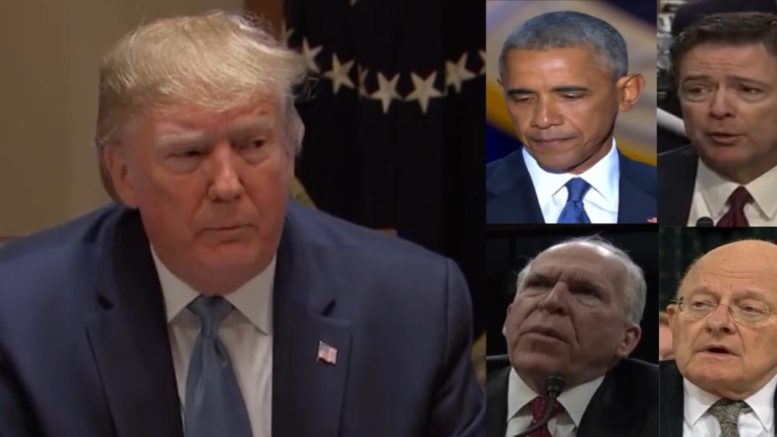 “The IG report just came out and I was just briefed on it. It’s a disgrace what happened to respect to the things that were done to our country. It should never again happen again to another president. It is incredible, far worse than I would have ever thought possible,” the President said.

“They had no nothing, it was concocted. And you say what you want– it’s probably something that never happened in the history of our country,” he added.

The Commander in Chief went on to say: “They fabricated evidence, they lied to the courts and they did all sorts of things to have it go their way. This was something that we can never allow to happen again. The report actually, and especially when you look into it in the details of the report, are far worse than anything I would’ve ever imagined. What they were doing and what they would’ve done, if I didn’t make a certain move– a certain move that was a very important move. Because it would’ve been even worse if that’s possible, and they might’ve been able to succeed.”

“This was an overthrow of government, this was an attempted overthrow and a lot of people were in on it, and they got caught,” the President explained. “They got caught red-handed and I look forward to the Durham report, which is coming out in the not too distant future. He’s got his own information, which is this information, plus, plus, plus. It’s an incredible thing what happened, and we’re lucky we caught them. I think I’m gonna put this down as one of our great achievements. Because what we found and what we saw, never ever should this happen again in our country.” (Continued Below)

Horowitz listed more than 17 significant inaccuracies and omissions with the FBI’s Crossfire Hurricane probe into Trump’s campaign. The malfeasance appeared to occur during the FBI’s application for a Foreign Intelligence Surveillance warrant on Carter Page, a short term campaign volunteer.

“As a result of the 17 significant inaccuracies and omissions we identified, relevant information was not shared with, and consequently not considered by, important Department decision makers and the court, and the FISA applications made it appear as though the evidence supporting probable cause was stronger than was actually the case. We also found basic, fundamental, and serious errors during the completion of the FBl’s factual accuracy reviews, known as the Woods Procedures, which are designed to ensure that FISA applications contain a full and accurate presentation of the facts,” stated Horowitz’s report. (Video Below)

(Related: Right After The IG Report Was Released, Durham Issues A Rebuttal To Horowitz’s Findings: “We Do Not Agree With Some Of The Report’s Conclusions As To Predication & How FBI Case Was Opened”)