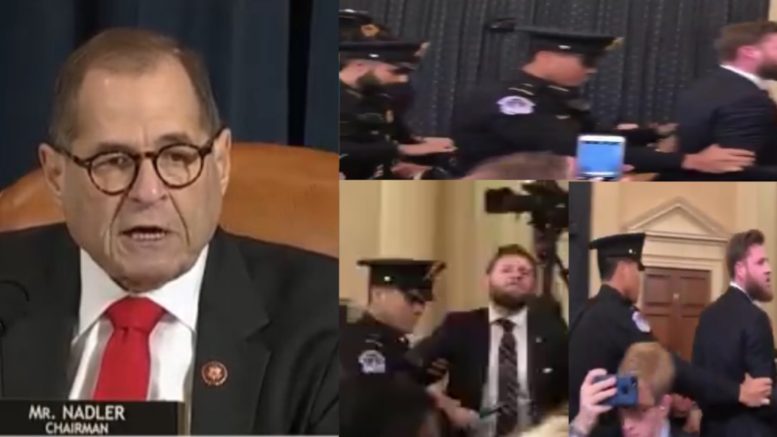 On Monday during the Democrat-led impeachment inquiry hearing in the House Judiciary Committee, Chairman Jerry Nadler (D-NY), opened with the committee’s rules for the hearing and attempted to begin his opening statement.

However, during his opening, a pro-Trump protestor stood up and began yelling, accusing Nadler of “committing treason” by trying to remove President Trump from office.

Owen Shroyer, the host of Infowars “War Room”, was identified as the protestor that interrupted the hearing.

He yelled at Nadler and the other Democrats, accusing them of trying to change the outcome of the 2016 presidential election by going through with impeaching President Trump over his contacts with Ukraine.

“Americans are sick of your impeachment sham, they’re sick of the Democrat treason,” Shroyer declared. “We voted for Donald Trump! We know who committed the crimes, it wasn’t Trump. Trump is innocent!”

Shortly after he began to voice his outrage at the Democrats, multiple police escorts showed up and removed him from the hearing room as Shroyer continued to yell. (Continued Below)

Nadler, whose opening statement Shroyer interrupted, stressed after he was escorted out of the hearing room, that the audience was meant to just “observe” the committee hearing.

"We are voting for Donald Trump … Americans are sick of your impeachment scam."

A protestor is removed from the room after he interrupts House Judiciary Chairman Jerry Nadler as the committee's second impeachment hearing begins.