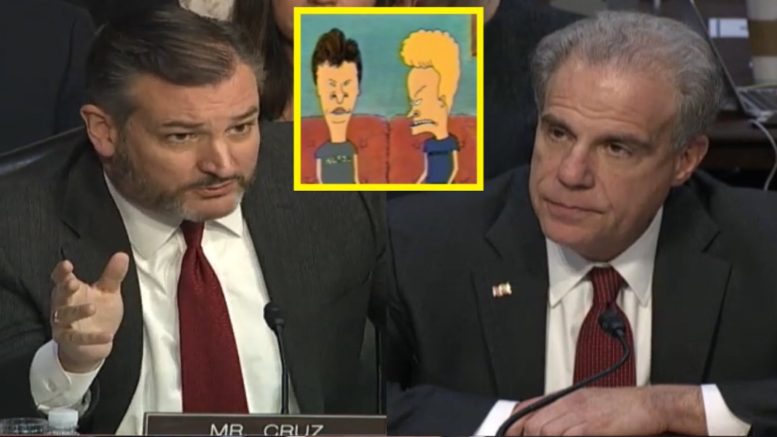 Senator Ted Cruz (R-TX), while questioning the DOJ watchdog, likened the FBI’s tactics to send “in spies” and “a wiretap” on President Donald Trump’s 2016 presidential campaign as “Beavis and Butt-Head”, rather than the fictional spy Jason Bourne.

“I can tell you from my time at the Department of Justice and from my time in law enforcement, any responsible leader when hearing that you’re talking about sending in spies and sending in a wiretap on any presidential nominee should say, ‘What in the hell are we doing?’” Senator Ted Cruz declared.

“And by the way, the people up the chain who are saying ‘We didn’t know,’ if you had responsible leadership there’s no more important decision than you make,” he continued.

“I can tell you, when I was at DOJ, if someone said let’s tap Hillary Clinton or let’s tap Bill Clinton or John Kerry, the people there would have said, ‘What in the hell are you talking about?’” the Texas Senator stated.

“What was going on here, this wasn’t Jason Bourne. This was Beavis and Butt-Head!” he proclaimed, which prompted a burst of laughter in the committee. (Video Below)

Sen. Ted Cruz on the oversight of the FBI's Russia probe: "This wasn't Jason Bourne. This was Beavis and Butt-Head." https://t.co/QYeNW3Mzpx pic.twitter.com/2ZGLooG6E7

Cruz: “A lawyer at the FBI creates fraudulent evidence, alters an email that is in turn used as the basis for a sworn statement to the court that the court relies on. Am I stating that accurately?”