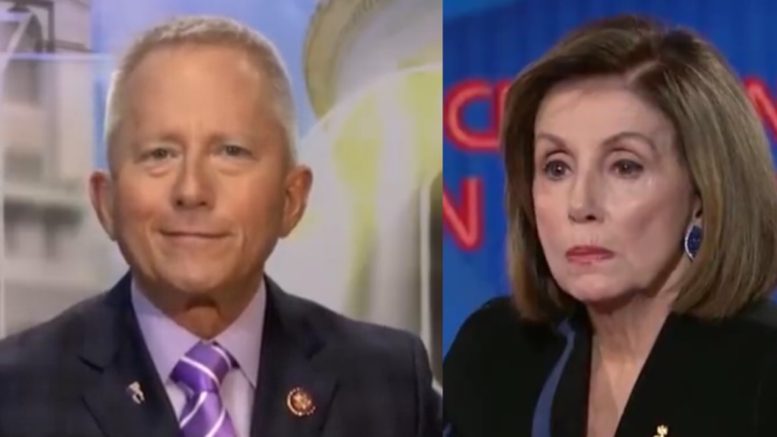 Van Drew was one of two Democrats, along with Minnesota Rep. Collin Peterson, who voted against the Democrats’ initial impeachment inquiry on Halloween.

As Swamp Drain previously reported, Van Drew told Fox News host Maria Bartiromo last month that he would not be voting for impeachment with the rest of his party.

“I would imagine I will be voting no,” the New Jersey Congressman said. “Now, I always have a codicil if there is something new, something we haven’t heard, something that really rises to the level of treason or you know, a high crime, that would be different. But we don’t see that. We see little variations–- hearsay, discussions somebody heard something somebody else said.”

“Our founding fathers had vigorous debates on whether they would even allow impeachment in the Constitution. You don’t disenfranchise voters, millions upon millions of voters. Voters choose their leaders in America,” Van Drew added.

Several Democrats with knowledge of the matter told Politico that the question “was now when, not if, Van Drew was joining the Republican Party.” Meanwhile, multiple senior Democrats have tried unsuccessfully to reach the New Jersey lawmaker, Politico reported. (Continued Below)

According to The New York Times, Van Drew had been under discussions with senior Trump administration officials about switching parties.

An official announcement from the congressman could come next week. Meanwhile, the House Judiciary Committee voted on Friday the 13th, to adopt their two articles of impeachment, alleging abuse of power and obstruction of Congress, with a straight party-line vote of 23-17. A final roll call in the full House is expected this week. (Continued Below)

Van Drew told Maria Bartiromo last month that several other moderate Democrats were “quietly concerned” about the impact impeachment could have on their political futures. “I don’t know how other folks will vote because in all honesty, originally, I thought there were going to be a few more– not that it matters to me if I’m one or I’m a hundred and one. I do what I believe is right,” he said.

“But there is some discussion among some of them quietly, privately of concern, certainly. What I’m hearing out in the street with most people is: they’re kind of tired, kind of worn out, kind of bored, most folks. And they really want to move on unless there is something new and amazing. We know the end game here,” Van Drew added.

There are currently 31 Democrats who represent districts won by President Trump, who won Van Drew’s New Jersey district by five points. (Video Below)

(Related: Steve Bannon: “Nancy Pelosi Is Risking Now Her Speakership By Continuing To Press On [Impeachment]”)