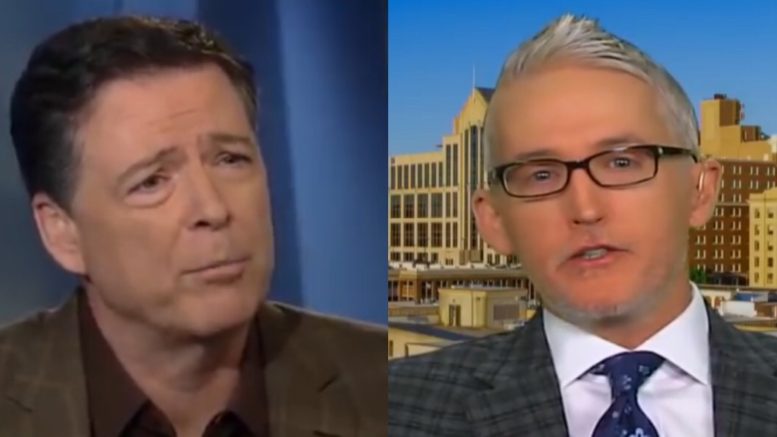 Fox News contributor and former South Carolina Republican congressman, Trey Gowdy, spoke with host Maria Bartiromo on Fox News’ “Sunday Morning Futures”, where he weighed in on the long-awaited Department of Justice Inspector General’s report pertaining to the origins of the Russia investigation.

Former FBI Director James Comey, however, tried to clear up what he meant when he declared that he was vindicated after the DOJ watchdog, Michael Horowitz released his report regarding the FISA process, in an interview on Fox News with Chris Wallace Sunday.

Inspector General Horowitz testified last Wednesday and told Senator Lindsey Graham (R-SC): “I think the activities we found here don’t vindicate anybody who touched this, including the leadership.”

Comey, on Sunday, admitted to Wallace that his handling of the FISA process was not acceptable. “He’s right. I was wrong,” Comey said of Horowitz’s findings. “I was overconfident in the procedures that the FBI and Justice [Department] had built over twenty years. I thought they were robust enough.”

“It’s incredibly hard to get a FISA. I was overconfident in those. Cause he’s right, there was real sloppiness — seventeen things that either should’ve been in the applications or least should’ve been discussed and characterized differently. It was not acceptable,” Comey confessed.

Trey Gowdy responded to Comey admitting that he was wrong, saying that the former FBI director is “two years too late.” (Continued Below)

“This morning Comey admitted that he was wrong. Sometimes it’s better late than never and sometimes it’s just too damn late,” Gowdy said. “And in this case, Comey is two years too late.”

“We could’ve used his objectivity, we could’ve used him as a head of the FBI helping Republicans figure out what was happening with FISA, instead of thwarting us and obstructing us. He said it was a policy and procedure issue. It’s not. There have always been policies against manufacturing evidence and withholding exculpatory evidence. That’s not new. Those aren’t new policies,” Gowdy said.

Gowdy previously told former FBI agent Peter Strzok, when he had testified before lawmakers: “The bias ran through the U.S. government, and it’s clear for everyone to see.”

He responded to the “bias” on Sunday saying, “You’ve got Fusion GPS, Christopher Steele, the DNC, Hillary Clinton, and the mainstream media. All of their work product made its way into the application for FISA. So, it’s one thing to have naked bias that everyone can see and judge for themselves. It’s another thing when you launder that bias through the United States government, place the imprimatur of the DOJ and the FBI, then present it to a court.”

“So there’s no question bias made its way into the FISA application. Horowitz is saying ‘I couldn’t find it at the beginning, but we damn sure found it at the end’, and it’s called a court pleading under the imprimatur of the Department of Justice,” he added.

He also noted there was exculpatory evidence in the FISA report relating to George Papadopoulos that was not revealed to the FISA court. “Guess what, Comey? That’s called exculpatory information. The court needs to be told that. It’s the fundamentally fair thing to do to Papadopoulos, and the court was not told about it,” Gowdy explained. (Video Below)