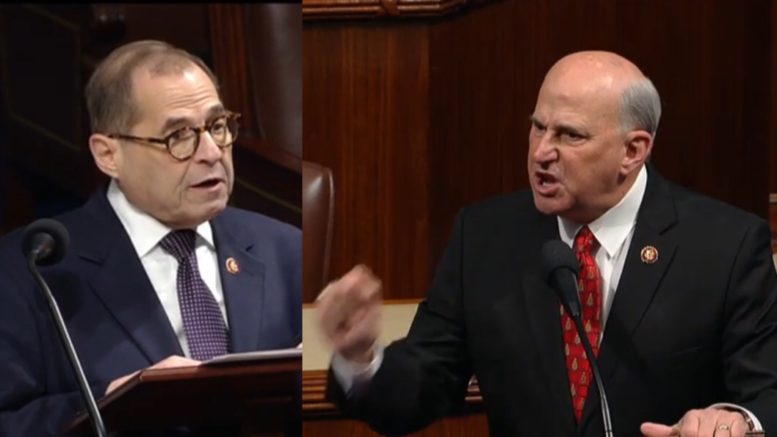 After his statement, Gohmert returned to the podium to address Jerry Nadler (D-NY) after the House Judiciary Committee Chairman accused the Texas congressman of spouting “Russian propaganda”.

Rep. Gohmert said in his statement: “In 1998, Senator Schumer said, ‘This impeachment will be used as a routine tool to fight political battles’. We thought it was a prediction, it was a promise. And now, it’s playing out. It’s exactly what’s being done here.”

“And, for those who say we don’t address the defenses or facts, here you go. The impeachment serves two purposes: stop the investigation by the U.S. Department of Justice and Ukraine into the corruption of Ukraine interference into [the] U.S. election in 2016,” Gohmert said, as Politico wrote in January 2017.

“You said this was about ‘Oh this terrible Russian collusion, oh and then failed through. It’s about emoluments, it’s about bribery, it’s about extortion,'” Gohmert sarcastically listed off the Democrats’ ever-changing claims. “But one thing hasn’t changed and that is the intent to impeach this president. It’s always been there.”

“But let’s be honest,” the Texas congressman continued, “The president turning his back on Ukraine? That happened in 2009. Because in 2008, Ukraine invaded Georgia. What happened? Bush put sanctions on Russia to teach them a lesson. What happened after that? Well, in March of 2009, Hillary Clinton was sent over to Russia with a reset button to say, ‘Bush overreacted. We’re okay that you invaded Georgia.’ It was a green light to Russia to invade Ukraine.” (Continued Below)

“And what do you do? Oh yeah, you send blankets and MRE’s and you eat and be warm while the Russians are killing [th]em. That is what the Obama administration did,” he added.

Gohmert went on to express: “This is a travesty and we’re in big trouble. Because Schumer was right. Now, it’s lowered even farther– the bar. It will be used for political battles in this county’s end is now in sight. I hope I don’t live to see it. This is an outrage!”

After Gohmert left the podium, however, Rep. Nadler responded to the Texas Congressman’s statement and claimed that Gohmert spouted off “Russian propaganda.” (Video Below)

“I am deeply concerned that any member of the House would spout Russian propaganda, on the floor of the House,” Nadler said.

Gohmert went back to the podium to demand that Nadler’s words be stricken down from the record”, and it appeared he yelled: “Have his words taken down.”

(Related: Rep. Collins Steps To The Podium & Rips The Entire Impeachment Process: “This Is Not A Solemn Occasion”)