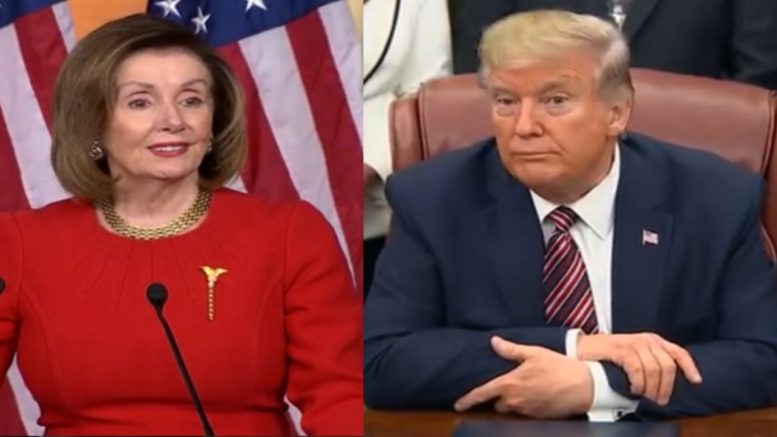 House Speaker Nancy Pelosi (D-CA) held a press conference the day after Democrats in the House voted to impeach President Donald Trump on two articles of impeachment: “abuse of power” and “obstruction of Congress”.

Before Democrats voted to impeach the President though, they claimed it was “sad” and “somber”, even wearing black attire for impeachment day. During Pelosi’s presser Thursday, she admitted that she “has a spring in their step” because the “President was held accountable”, then told reporters she wasn’t going to “answer any more questions about impeachment”.

“We’ve been hearing from people all over the country, since last night and this morning. Seems like people have a spring in their step because the President was held accountable for his reckless behavior. No one is above the law and the Constitution is the supreme law of the land. … And the President has been held accountable,” Pelosi claimed. “It is really interesting to see the response we are getting, bipartisan across party lines.”

“I, myself, want to say, I have a spring in my step because of the moral courage of our caucus– to see them all– members go to the floor, … and speak about our Constitution, about the facts of the case, so clearly, so patriotically, so prayerfully, and so solemnly, but so definitely,” she said.

Pelosi then noted that she won’t choose impeachment managers or send them to Senate until the Senate agrees on trial rules: “When we impeached the President, immediately everyone was on for the next thing. The next thing for us will be when we see the process that’s set forth in the Senate. Then, we’ll know the number of managers that we may have to go forward and who we would choose. …When we see what they have, we’ll know who and how many to send over,” she stated.

President Donald Trump responded on Twitter after Pelosi said she is delaying sending the articles to the Senate writing, “Pelosi feels her phony impeachment HOAX is so pathetic she is afraid to present it to the Senate, which can set a date and put this whole SCAM into default if they refuse to show up! The Do Nothings are so bad for our Country!” (Continued Below)

While taking questions from reporters, Pelosi was continuously pressed over why she is holding off on transmitting the two articles of impeachment to the Senate for trial. The Speaker responded, “I said what I was going to say,” then asked if anyone had questions about other issues such as the “SALT tax,” stating, “I’m not going to answer any more questions on this.”

“I would think if Nancy Pelosi thought impeachment was so important that she had to put this before the American public … the press conference the day after impeachment — that she has weekly — I thought she would have welcomed questions about impeachment,” McCarthy said. “Unfortunately, she told you they were Republican talking points and she would not take your questions. I never thought a speaker would act that way.” (Video Below)

Pelosi feels her phony impeachment HOAX is so pathetic she is afraid to present it to the Senate, which can set a date and put this whole SCAM into default if they refuse to show up! The Do Nothings are so bad for our Country!

Pelosi: “People have a spring in their step”:

To continue to lie!

“The response that we are getting, bipartisan, across party lines”

Give us a break! pic.twitter.com/cKqy9nM3ce

We at the @WhiteHouse have been answering questions on it all morning @SpeakerPelosi – because when you wrongfully impeach a President, people deserve answers. You’ve been talking nothing but impeachment for months (years really) – why the silence now? https://t.co/jjy2PIDeik

It is worth noting, however, Pelosi and Schiff viewed impeachment as “urgent”, now the Speaker is delaying the two articles to the Senate. Here is Pelosi when she announced the “impeachment inquiry” as “urgent”:

It’s no secret Dems rushed their charade in the House.

*Pelosi invoked “urgency” on the very day she announced it.

*Schiff said, “We view this as urgent.”

Now they are DELAYING the process for political gain.

Where’s the media outrage over this blatant partisan posturing? pic.twitter.com/oZsZfikDrz