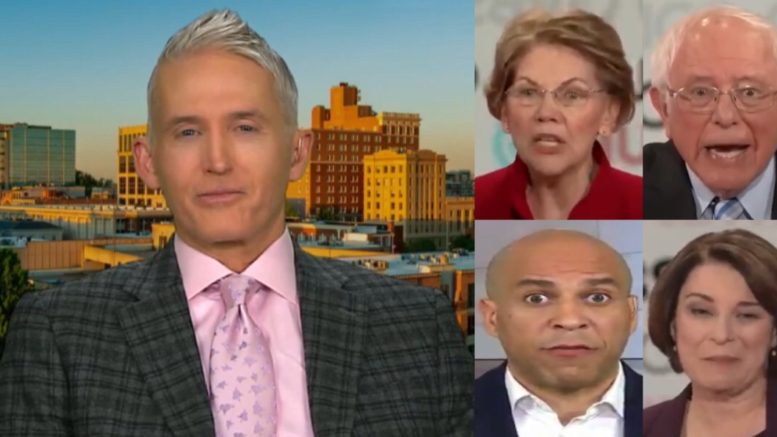 Fox News contributor and former South Carolina congressman, Trey Gowdy, spoke with host Dana Perino Monday during “The Daily Briefing”, where he weighed in on House Speaker Nancy Pelosi (D-CA) withholding articles of impeachment to the Senate, along with voicing his concern over the Democratic Senators who are running against President Trump, which will be the jury in the Senate trial.

Pelosi has signaled that the House is waiting for the Senate to set out how President Trump’s trial will be conducted before they determine the next steps, such as designating impeachment managers.

Speaker Pelosi doubled down Monday morning, tweeting: “The House cannot choose our impeachment managers until we know what sort of trial the Senate will conduct. President Trump blocked his own witnesses and documents from the House, and from the American people, on phony complaints about the House process. What is his excuse now?”

President Donald Trump took to Twitter to react to Pelosi’s games: “Pelosi gives us the most unfair trial in the history of the U.S. Congress, and now she is crying for fairness in the Senate, and breaking all rules while doing so. She lost Congress once, she will do it again!” he declared.

Trey Gowdy responded to Pelosi withholding articles of impeachment to the Senate, calling it a political trial.

“I wish this were a judicial proceeding, but keep in mind Dana, if it were, then Adam Schiff would not have been leading the investigation. 60 House Democrats would not have made up their minds before the first syllable of the Mueller report [came out],” Trey Gowdy said. (Continued Below)

The jury has already made up its mind. Even Dick Durban, who’s now calling for impartiality, has already passed judgment on the credibility of the witnesses. He said the president’s conduct was beneath the dignity of the office and he was incredibly troubled by that,” Gowdy stated.

“That does not sound like an impartial objective, dispassionate juror. I mean, how many of the Senators, how many members of the jury are actually running to take Donald Trump’s job? You would never have that in a real judicial proceeding,” Gowdy told Perino. [Emphasis added]. (Video Below)

(Related: Rep. Collins On Pelosi Withholding Articles From Senate: “Her Hypocrisy In This One Is So Overwhelming, It Should Knock People Down”)