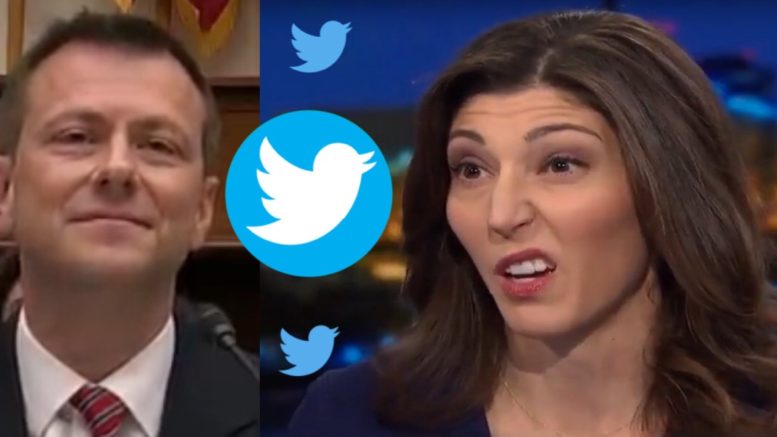 Page was asked about the “insurance policy” text that Peter Strzok had sent to her during the 2016 election, which was released by the Justice Department in 2017.

“It’s an analogy,” Lisa Page claimed. “First of all, it’s not my text, so I’m sort of interpreting what I believed he meant back three years ago, but we’re using an analogy. We’re talking about whether or not we should take certain investigative steps or not based on the likelihood that he’s going to be president or not.”

She continued, “You have to keep in mind… if President Trump doesn’t become president, the national-security risk– if there is somebody in his campaign associated with Russia, plummets. You’re not so worried about what Russia’s doing vis-à-vis a member of his campaign if he’s not president, because you’re not going to have access to classified information, you’re not going to have access to sources and methods in our national-security apparatus.

“There was no insurance policy. #2019in5words”, Lisa Page tweeted, in turn causing twitter to erupt. (Video Below)

During her interview with the Judiciary Committee in July 2018, Page was questioned at length about that text — and essentially confirmed this referred to the Russia investigation while explaining that officials were proceeding with caution, concerned about the implications of the case while not wanting to go at “total breakneck speed” and risk burning sources as they presumed Trump wouldn’t be elected anyway, reported Fox News.

Further, Lisa Page confirmed investigators only had a “paucity” of evidence at the start of Crossfire Hurricane. Inspector General Michael Horowitz confirmed just that in the DOJ’s findings of the 478-page of the FISA report.

There was no insurance policy.#2019in5words

Page says the text messages between her and Strzok, like having an “insurance policy” for a Trump presidency, have been mutilated to death and been used to bludgeon an “institution I love.” She says the insurance policy text was an “analogy.” https://t.co/GVbey1M1cr pic.twitter.com/XKuN3QTjwy

Twitterverse erupted after Lisa Page posted “There was no insurance policy”:

You lied to the FISA court

51 violations in ONE FISA. Absolutely no excuse.

I hear you’re getting new “insurance” agents from the firm Durham and Barr. They got you covered. Their speciality is treasonous acts and lying to FISA courts. #DirtyCop

Getting Nervous? Do you need an insurance policy? I hear Barr is selling some cheap. Call him before its to late.

I fixed it for you:
You’re a lying, treasonous homewrecker #2019in5words

We know what you guys did. The only ones who don’t are the folks that just watch @maddow and @donlemon. The rest of us are fully up to speed. Right @benjaminwittes?

We don’t believe you.

Don't be interviewed by Maddow.#2019in5words.

You will soon be charged. #CoupAttemptin5words

Lying is not a good look. pic.twitter.com/4rGmylSLRd

Your color is orange, dear. Get use to it!

Hope these two were worth it—😂😂😂😂 pic.twitter.com/Ytu2UfTBcX