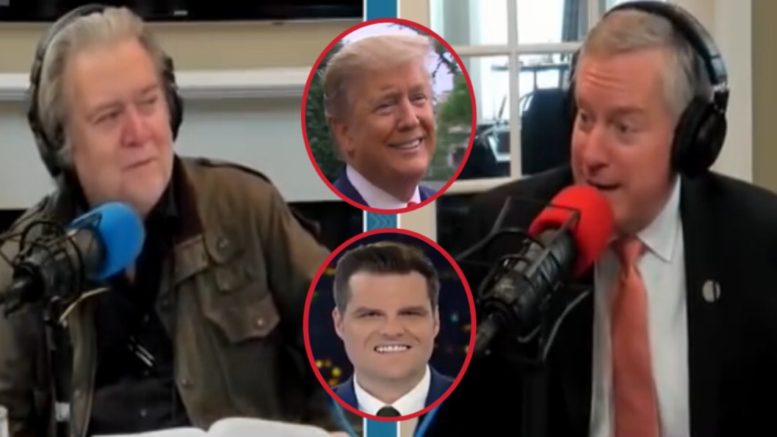 Congressman Mark Meadows (R-NC) said Thursday that Rep. Matt Gaetz (R-FL) should be among the GOP lawmakers given a role on President Trump’s impeachment defense team.

Meadows, appearing on “War Room: Impeachment,” told former White House chief strategist Stephen Bannon that it was “imperative” the president’s defense team include individuals with an intimate knowledge of the witness testimony and other evidence from the House impeachment process, reported The Hill.

Host Stephen K. Bannon asked Rep. Mark Meadows, “Who should be part of the team for the president?”

“If I had to pick a team, I would say you get in Jim Jordan, Matt Gaetz, John Ratcliffe,” the North Carolina congressman replied outlining his ideal lineup.

Why is Gaetz’s name not popping up all the time?” the War Room host inquired. “He’s fire-breathing and he’s strategic. He’s the one who blew this thing up in the Star Chamber,” Bannon referenced Gaetz storming the SCIF early on in the impeachment proceedings.

Rep. Meadows praised his colleague, saying that Congressman Matt Gaetz “had one of the greatest performances in the judiciary. And I say performances because he brought the truth. Listen, everybody wants to have their day in the sunshine. This is not a time to play politics. It’s a time to put your best team on there, and I think Matt Gaetz would be one of them.” (Continued Below)

Rep. Mark Meadows did not rule out the possibility though of playing a role in President Trump’s defense strategy. But he was particularly supportive of Congressman Gaetz, a Trump defender who produced a number of viral moments in the impeachment proceedings.

Gaetz led the fight with Freedom Caucus members and Republican colleagues in October, demanding transparency into Democrats’ secret impeachment probe that was held in the basement of the Capitol against President Donald Trump. Republicans stormed the closed-door hearing in the SCIF, which was led by House Intel Chairman, Adam Schiff (D-CA).

Rep. Meadows: “Having seen the documents, having been in the room, having looked at the eyes of the witnesses, I can tell you there’s not anything there but hearsay.”

"Having seen the documents, having been in the room, having looked at the eyes of the witnesses, I can tell you there's not anything there but hearsay," @RepMarkMeadows told @WarRoom2020.

Could Meadows be a member of Trump's defense during a Senate trial? https://t.co/z2B55z4F72 pic.twitter.com/wIDheMMm0w

(Related: Senator Hawley Set To Introduce A Measure To Dismiss The “Bogus” Impeachment)