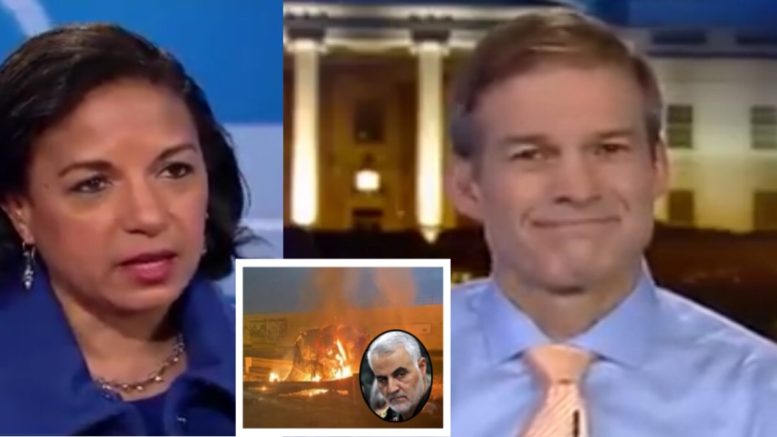 Former national security advisor Susan Rice spoke with MSNBC and CNN Friday night after Gen. Qassem Soleimani was killed in a U.S. airstrike at Baghdad International Airport Thursday. Rice had claimed, “the Obama administration wasn’t presented with the opportunity to take out Soleimani.”

Rice further accused the Trump administration of “misrepresenting the facts” on Soleimani’s death, which led Republican Ohio Congressman Jim Jordan to fire back at the former national security advisor.

“To my knowledge and certainly while I was national security advisor, the Obama administration was not presented with an opportunity by our intelligence community by the U.S. military to strike Qassem Soleimani,” Rice told MSNBC’s, Rachel Maddow.

“Had we been presented such an opportunity, what we would have done is weighed and very carefully and very deliberately the risks versus the potential rewards,” she claimed.

Rice also questioned whether Trump made the right decision. “So, if in fact the administration can be believed that there was indeed strong intelligence of an imminent threat against the United States that’s being carried out by Soleimani and related militia then the question becomes [was] there more than one way to address that threat?” she told Maddow.

“Was the only way to deal with it to kill Soleimani? Certainly, given his history and track record, he deserves his just rewards but the question is does that serve our interests? Does that make us more secure? And I’m dubious about that,” Rice said. (Continued Below)

In a separate interview Friday, Rice told CNN’s Wolf Blitzer that “during my tenure as national security advisor we didn’t have the opportunity to my knowledge,” adding that “she couldn’t trust the Trump administration to tell the truth.”

“This administration sadly, tragically, has a record of almost-daily misrepresenting the facts — telling falsehoods about issues big and very small. So, it’s hard to have confidence on the face at their representation,” she told Blitzer.

Rep. Jim Jordan fired back at Rice on Twitter Saturday writing: “Susan Rice accused the Trump administration of ‘misrepresenting the facts’ on Soleimani’s death. This from the person who misled the American people 5 times, on 5 separate Sunday shows, 5 days after the Benghazi attack.”(Continued Below)

Susan Rice was playing stand-in on the morning of Sept. 16, 2012, when she appeared on five Sunday news programs, a few days after the September 11, 2012, deadly attack in Benghazi, Libya, that killed four Americans, including American Ambassador Christopher Stevens.

Rice had stated that the attack was the work of a spontaneous crowd, instead of Islamic militants, and she was supplied talking points by intelligence agencies.

Former Secretary of State Hillary Clinton and other State Department officials were warned by overseas U.S. diplomats about blaming the 2012 Benghazi terror strikes on an “inflammatory” internet video, according to an email released by House Republicans probing the fatal attacks. The email was sent three days after the fatal Sept. 11, 2012, attacks on a U.S. outpost in Benghazi, Libya, and two days before Susan Rice went on TV to say the attacks were inspired by the anti-Islamic video.

When asked during a 2013 Senate hearing about what sparked the attacks, Clinton responded: “The fact is we had four dead Americans. Was it because of a protest or was it because of guys out for a walk one night who decided that they’d they go kill some Americans? What difference at this point does it make?” (Video Below)

Susan Rice accused the Trump administration of “misrepresenting the facts” on Soleimani’s death.

This from the person who misled the American people 5 times, on 5 separate Sunday shows, 5 days after the Benghazi attack.

Susan Rice: "The Obama administration was not presented with an opportunity by our intelligence community or by the U.S. military to strike Qassem Soleimani." pic.twitter.com/y0CrcnfLvw

"I am doubtful that ultimately it will prove to be the right thing," says former national security adviser Susan Rice about President Trump's decision to order a US airstrike that killed Iranian general Qasem Soleimani. https://t.co/476Q4ooKy8 pic.twitter.com/6TLds9gpg1