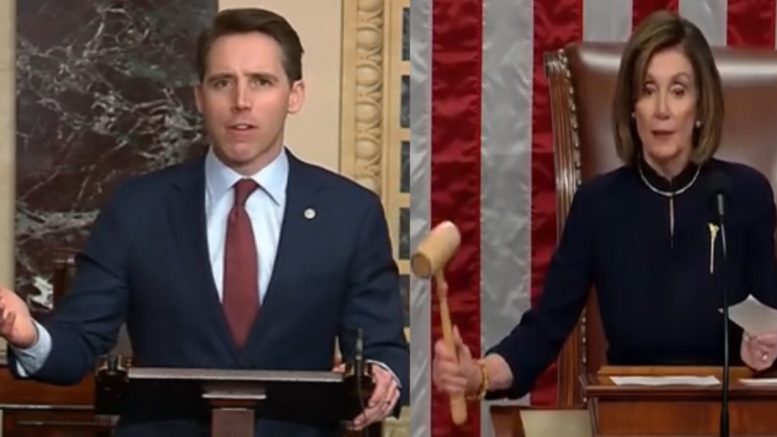 Senator Josh Hawley (R-MO) took to Twitter Thursday to announce that he would introduce a measure on Monday to dismiss impeachment in the Senate. This comes as House Speaker Nancy Pelosi (D-CA) reiterated her plan to not make any more moves with impeachment until she knows the level of “fairness” with the Senate trial rules.

On Monday, Senator Hawley officially introduced his resolution to update the Senate’s rules and to allow dismissal of “partisan impeachment” against President Trump.

In a speech on the Senate floor Monday, Senator Josh Hawley said that it has been “19 days since the House of Representatives impeached the President of the United States”.

Senator Hawley suggested that Speaker Pelosi may hold the articles indefinitely and prevent the Senate from “carrying out its Constitutional responsibilities”, after a “bipartisan coalition in the House of Representatives voted against impeachment”.

“I think we could probably see the longer we wait, why the Speaker is so reluctant to not have a trial. It was a purely, partisan process in the House. She had Democrats abandon her vote with Republicans in a bipartisan coalition against impeachment. And the articles– the articles don’t even allege a crime. First time in American history impeachment of a president– where no crime is even alleged in the articles. No evidence of a crime even presented. No wonder she doesn’t want to have a trial,” Senator Hawley expressed.

“And that is why today I am introducing a resolution to update the Senate’s rules to account for this unprecedented attempt by the Speaker of the House to delay, to deny, to obstruct a trial in the United States Senate,” he announced.

“So today I am proposing new rules in the United States Senate that will set a time limit on the actions of the House. It will give the House Speaker 25 days from the date the articles were adopted and published– 25 days to transmit those articles here to the Senate, to exhibit them as the House rules and Senate rules currently speak of and anticipate,” Senator Hawley said.

“And if that is not done, if, in 25 days, the House Speaker has not acted the Senate is able to move forward with a trial, then under my resolution in the change in the rules I propose today, the Senate would be able to introduce a motion to dismiss these articles for lack of prosecution,” he continued.

“In the real world, when a prosecutor brings a case but refuses to try it, the court has the ability and the defendant has the right, … to have those articles, those indictments, those charges, dismissed. That is precisely the action I am proposing today. It is time to update the Senate’s rules to account for this unprecedented attempt at obstruction, at denial, at delay. It is time for the Senate to act,” Hawley explained. (Video Below)