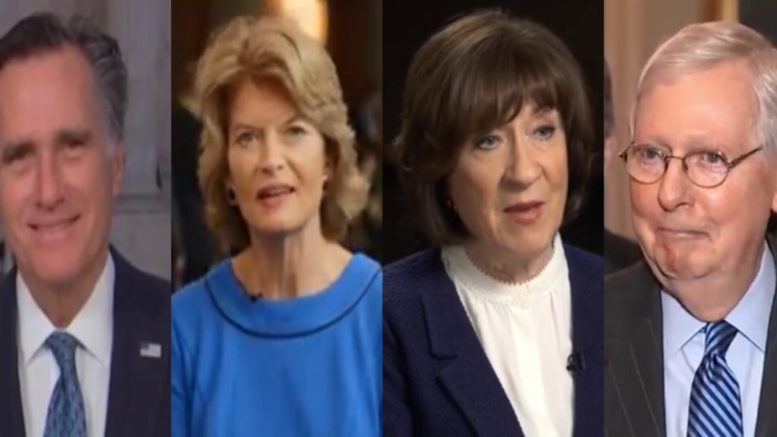 Senate Majority Leader Mitch McConnell (R-KY) confirmed Tuesday that he has the votes to start an impeachment trial even without an agreement on potential witnesses – once the chamber receives the articles from the House.

The GOP leader notified Republican senators at their weekly lunch that he has enough votes to proceed – meaning a simple majority of 51 votes – even as Democrats urge McConnell to accept their demands to seek certain witness testimony, reported Fox News.

“We have the votes,” McConnell told reporters Tuesday. “Once the impeachment trial has begun to pass a resolution, essentially the same as the 100 to nothing vote in the Clinton trial.”

Senator McConnell also told reporters the vote would kick off “phase one” of President Trump’s impeachment trial, while the issue of witnesses would come up later and involve “intense discussion.”

The Senate majority leader has maintained all along that he wants to model the impeachment trial for President Trump after that of former President Bill Clinton, by dealing with potential witnesses after the trial begins.

“The issue of the appropriate of calling witnesses was addressed. Obviously that is the most contentious part of one of these proceedings and that will be addressed at that time and not before the trial begins,” Senator McConnell said. (Continued Below)

And even as Senator McConnell said he the votes to be able to proceed, he insists that the chamber first needs to receive the articles of impeachment from the House.

“With regard to getting the papers, it is a rule of impeachment in the Senate that we must receive the papers. It continues to be my hope that the Speaker will send them on over. The House argued this was an emergency, they needed to act quickly, the president was such apparently from their point of view, such danger to the country that they needed to really rush this through. And they sat on the papers now for 3 weeks. I hope that will end this week,” Senator McConnell said.

Speaker Nancy Pelosi (D-CA) has been holding onto those charges ever since last month, hoping to extract favorable terms for a trial. (Continued Below)

Moderate Republican senators, the ones most likely to defect, indicated they are backing Senator McConnell though.

“I’m comfortable with that,” Sen. Mitt Romney told reporters on Capitol Hill Tuesday when asked about McConnell’s proposal to call on additional witnesses after opening arguments are made in the president’s impeachment trial, reported Daily Mail.

The Hill reported Monday night that McConnell had the votes after two GOP swing votes, Sens. Susan Collins (Maine) and Lisa Murkowski (Alaska), said they would back McConnell’s position that the Senate should follow the precedent of the 1999 impeachment trial of former President Clinton and defer until later in the process the question of calling additional witnesses.

The announcement is a blow to Democrats who wanted one resolution at the outset that would establish both the rules for impeachment and include a specific deal on witnesses. But they needed four Republicans to vote with them to get the 51 votes needed to require a deal on witnesses at the outset, as per The Hill. (Video Below)

"We have the votes."

JUST IN: Senate Majority Leader Mitch McConnell announces that a Senate impeachment trial of President Trump would begin without deciding the question of witnesses as Democrats are demanding. https://t.co/OAfCCkQqsG pic.twitter.com/NuSy4912QD

NEW: "51 senators determine what we do and there will be I'm sure intense discussion, once we get past phase one, about the whole witness issue," McConnell tells ABC News' @MaryKBruce when asked if he can promise that there will be a vote on witnesses. https://t.co/vTZuyr7OFt pic.twitter.com/JJ5YfRGBxu

We leave you with more remarks by Senator McConnell:

How embarrassing and revealing for House Democrats to spend weeks telling the American people their partisan impeachment was so very urgent — and then delay it for political purposes. pic.twitter.com/cQnB3uEKhz

I respect my friends across the aisle, but it appears that one symptom of “Trump derangement syndrome” is a bad case of amnesia. https://t.co/DxY7R1ea55

(Related: Sen. Hawley Steps To The Podium & Presents A Resolution Giving Pelosi A Time Limit To Transmit Articles Of Impeachment)