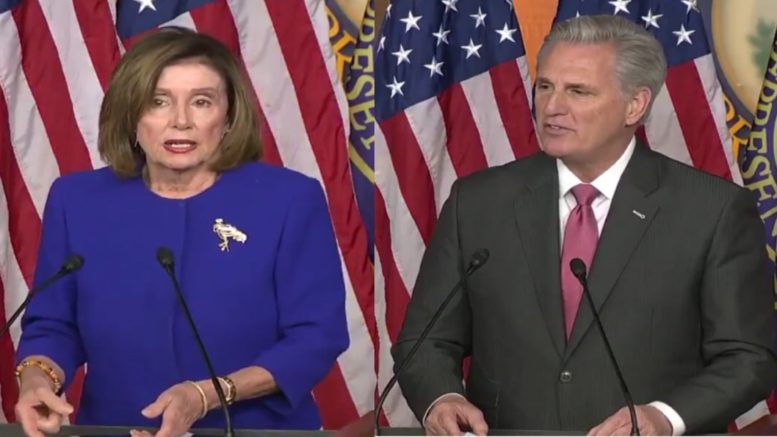 House Minority Leader Kevin McCarthy (R-CA) held his weekly press conference Thursday and pushed back at House Speaker Nancy Pelosi (D-CA), as she continues to hold back articles of impeachment from the Senate.

Speaker Pelosi told reporters Thursday on the articles: “No, I’m not holding indefinitely. I’ll send them over when I’m ready,” adding that she wants Senate Majority Leader to put together a resolution pertaining to the trial before the articles are transmitted.

“The Speaker continued to say today that she needs to see more from Senator McConnell on what the trial would look like before she sends the articles? Why is that an unreasonable request?” a reporter asked the House Minority Leader. “Why doesn’t Leader McConnell just come out and show what the rules of the proceeding are before she sends the articles.”

“Did she say that with a straight face?” Rep. Kevin McCarthy asked the reporter.

“She changed all that so it could not become fair. She took it out of Judiciary and put it in the Intel Committee, where they couldn’t focus on other things that are going on around the world– only focus on impeachment,” he noted. (Continued Below)

“And she has the gall to say she wants to determine what happens in the Senate?” the House Minority Leader asked. “Maybe she’s more concerned that her case is so weak. The Speaker does not have the power to continue to hold. This is something that is passed in the House and constitutionally has to move to the Senate.”

“She told us it was urgent– is why we had to move so quickly. And now she thinks she has the power of the Senate? Again, I wish she would read the Constitution and understand what power she has and what she does not have,” he added. (Video Below)

Asked if he supports Republican Senators who are willing to start the trial without the articles, Leader McCarthy said, “You know what? I support the Democratic Senator, Dianne Feinstein, who said, ‘The longer it goes on, the less urgent it becomes.'”

“It if is serious and urgent, send them over. If it is not, don’t send it over. The answer to Senator Feinstein is the Speaker saying ‘I guess it’s not too important’. Why did you waste an entire majority on trying to impeach a president and then hold the papers? Or what about her own committee chairman, Adam Smith, who said, ‘It is time,'” he noted.

“The only person who does not believe it’s time is the Speaker and I do not know why. Maybe the case is too weak,” Rep. McCarthy stated. [Emphasis added].

Q: "The Speaker continued to say today that she needs to see more from Senator McConnell on what the trial would look like before she sends the articles? Why is that an unreasonable request?"@GOPLeader: "Did she say that with a straight face?"

(Related: 49ers Fan Approaches Nancy Pelosi At Football Game & Tells Her: “I Don’t Like What You’re Doing To California”)