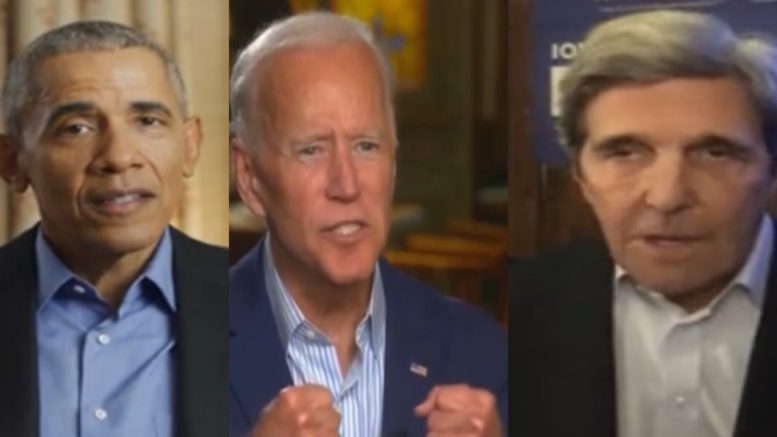 Former Secretary of State, John Kerry, spoke with CNN’s Brooke Baldwin Friday to claim that the Obama administration “never had a whiff of scandal”.

Last week John Kerry said in a tweet that he was endorsing Joe Biden because the former vice president can “put back together the country and the world that Donald Trump has broken apart.”

“I’m not endorsing Joe because I’ve known him for so long, “Kerry tweeted. “But because I know him so well: he’ll be ready on day one to put back together the country and the world that Donald Trump has broken apart.”

While speaking on CNN, Kerry told Baldwin, “I believe Joe Biden is the only person who has a set of relationships around the world, who has had this unbelievable breadth of experience as chairman of the Foreign Relations Committee and then, he was vice president for 8 years. And then, an administration by the way, which never had a whiff of scandal.” [Emphasis added].

“And so to me, you look at the head to head confrontations around the world, in state after state, where we might not be competitive otherwise, Joe Biden is the one who consistently beats the president or he is tied with him. And I believe that when he becomes the nominee, and the party unties behind him, there will be a broad recognition in the country between the qualities Joe Biden brings to the table versus the impulsivity and recklessness of our current president. (Continued Below)

Under the Obama-Biden administration, there was, in fact, more than a “whiff” of scandals.

Former Ambassador to the United Nations, Susan Power, the diplomat whose authority inexplicably was used to unmask hundreds of Americans’ names in secret intelligence reports during the 2016 election — engaged in Trump-bashing on her official government email, according to documents unearthed by an American Center for Law and Justice lawsuit. The conservative legal group is run by Trump defense attorney Jay Sekulow, as reported by The Hill.

The Obama Administration “never had a whiff of scandal” according to John Kerry; watch:

KERRY: The Obama Administration "never had a whiff of scandal" pic.twitter.com/PjFimzXgGS

(Related: Biden Claims Russian Interference Didn’t Happen When He & Obama Were In Power)

In 2016, FBI Director James Comey announced that despite evidence Hillary Clinton was “extremely careless” in her handling of classified emails on a private server, the bureau did not recommend to the Department of Justice that criminal charges be brought against the former secretary of state.

After the DOJ withheld documents for 6 years related to Former Attorney General Eric Holder pertaining to the Operation Fast and Furious scandal, during the Obama administration– last year, under Attorney General Jeff Sessions, he said that he was committed to transparency and the rule of law.

The Justice Department entered into a conditional settlement agreement with the House Oversight and Government Reform Committee. The settlement agreement was filed in federal court in Washington D.C., and ends six years of litigation arising out of the previous administration’s refusal to produce records requested by the committee, reported Fox News.

The Obama-era operation was a Bureau of Alcohol, Tobacco, Firearms, and Explosives (ATF) operation in which the federal government allowed criminals to buy guns in Phoenix-area shops with the intention of tracking them as they were transported into Mexico. But the agency lost track of more than 1,400 of the 2,000 guns they allowed smugglers to buy, per Fox News. (Continued Below)

U.S. Ambassador Christopher Stevens and three other Americans — foreign service officer Sean Smith and former Navy Seals Ty Woods and Glen Doherty — were killed as the Obama administration failed in a range of missteps before, during and after the fatal 2012 attacks in Benghazi.

Two other high ranking Obama officials, General David Petraeus and General James Cartwright, were also prosecuted as part of leak investigations. They both ultimately pled to lesser charges and were never indicted under the Espionage Act. Cartwright was also later pardoned. Including their cases, the total number of leak case prosecutions under the Obama administration was 10, as per Freedom of the Press.

Last year, Attorney General Jeff Sessions directed federal prosecutors to look into the sale of Uranium One to a Russian company – a transaction that President Trump has called the “real Russia story.”

The Hill reported that Russian officials engaged in a “racketeering scheme” to further its energy goals in the U.S. And an FBI informant recently told congressional committees that Russia paid millions to a U.S. lobbying firm in an effort to influence then-Secretary of State Hillary Clinton to make sure the deal was successful.

In 2013, Rosatom, backed by the Russian state, acquired a Canadian uranium mining company, now called Uranium One, which has assets in the U.S. Uranium is a key material for making nuclear weapons. Through the deal, Russia is able to own about 20 percent of U.S. uranium production capacity. Some investors reportedly donated millions of dollars to the Clinton Foundation. Former President Bill Clinton also received a $500,000 speaking fee in Russia and reportedly met with Vladimir Putin around the time of the deal, reported Fox News. (Continued Below)

In 2014, the former director of the Central Intelligence Agency, John Brennan, issued an extraordinary apology to leaders of the US Senate intelligence committee on Thursday, conceding that the agency employees spied on committee staff and reversing months of furious and public denials. Brennan acknowledged that an internal investigation had found agency security personnel transgressed a firewall set up on a CIA network, which allowed Senate committee investigators to review agency documents for their landmark inquiry into CIA torture. Among other things, it was revealed that agency officials conducted keyword searches and email searches on committee staff while they used the network, reported The Guardian.

In 2017, the IRS admitted in federal court that it wrongfully targeted Tea Party and conservative groups during the Obama administration because of their political viewpoints and issued an apology to clients for doing so. Lois Lerner waived her Fifth Amendment right against self-incrimination by delivering a statement House Oversight and Government Reform Committee in 2015.

Under the Obama administration, VA officials resigned after patients died due to delayed care.

In 2018, Inspector General Michael Horowitz released a report where he criticized former Attorney General Loretta Lynch and former President Bill Clinton after the infamous meeting on the Arizona tarmac, calling it “an error in judgment” as the Justice Department was investigating then-Democratic presidential candidate Hillary Clinton for her email practices while serving as secretary of state.

In 2018, Biden said in front of the council of foreign relations related to a Ukraine gas company, Burima, and his son Hunter: “I remember going [to Ukraine] convincing our team or others to convince the United States we should be providing for loan guarantees. I went over, I guess the 12th or 13th time. And I was supposed to announce there was another billion-dollar loan.”

“I had gotten a commitment from [Petro Oleksiyovych] Poroshenko and [Arseniy] Yatsenyuk that they would take action against the state prosecutor and they didn’t. So I said, ‘Nah, we’re not gonna give you the billion dollars.’ They said, ‘You don’t have authority, you’re not the President.’ I said, ‘Call him. You’re not getting the billion dollars if the prosecutor is not fired, you’re not getting the money.’ Well, son of a bitch! He got fired,” Biden admitted, referring to his tenure as vice president.

(Related: JW Sues For Records On Obama Ambassador & A List Of 24 Individuals Connected To The Dossier)