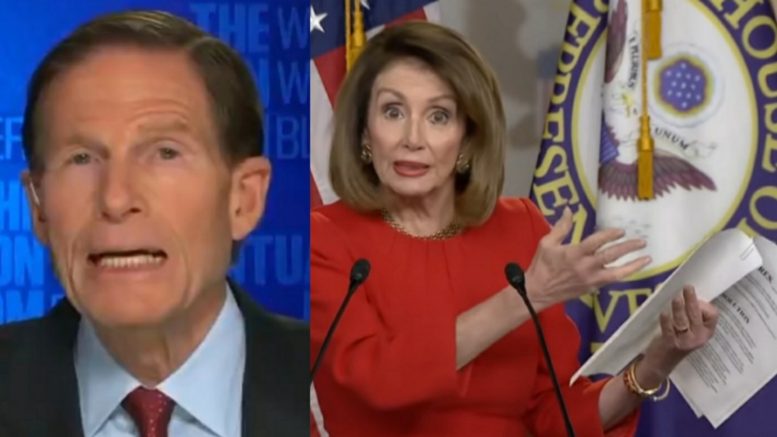 Pelosi caved Friday and announced that she will move forward next week to send impeachment articles to the Senate, after delaying the process since last month and trying to make demands for a preferred trial.

Asked if the delay in sending over the articles of impeachment to the Senate was worth it, “Senator Blumenthal replied, “I think that her timing has been excellent. And I said I would trust her judgment.”

(Related: GOP Responds After Nancy Pelosi “Caves” On Sending Articles To The Senate: “Alexa, What Is The Definition Of Hypocrisy?”)

“And now, she has decided after this week has enabled, the offer of testimony from John Bolton and additional documents to be revealed, which show the importance of witnesses and documents that can talk directly to what the president did when he did it, what happened as a result. They know– these witnesses, the four that we have asked to be presented– what directly the president did and said,” he continued.

“The American people, in this week, have really formed an opinion that these witnesses and documents should be heard,” the Connecticut Senator claimed. (Continued Below)

Senator Blumenthal continued: “And the best sign of the effect is my Republican colleagues, some of them, telling their hometown newspapers as Senator Collins did, just very recently in Bangor, Maine, that she is talking to Republican colleagues about witnesses and documents– that they are hearing from constituents, the American people, who are saying, ‘You know what a trial means? It means documents and witnesses.'”

(Related: Pelosi On Whether Impeachment Should Move ‘More Expeditiously’: “We Should Move Smartly & Strategically”)

“And I think the effect of Nancy Pelosi waiting this long has been to galvanize American public opinion,” he admitted. “70% of American’s now favored it– in favor of a real trial, not a sham trial that McConnell wants dictated by the defendant, who should not be setting rules of that trial.” [Emphasis added]. (Video Below)

"The effect of Nancy Pelosi waiting this long has been to galvanize American public opinion," says Sen. Richard Blumenthal about Speaker Pelosi's plans to send the impeachment articles to the Senate next week. https://t.co/Ka2B8PDfBm pic.twitter.com/YkceoG88rU