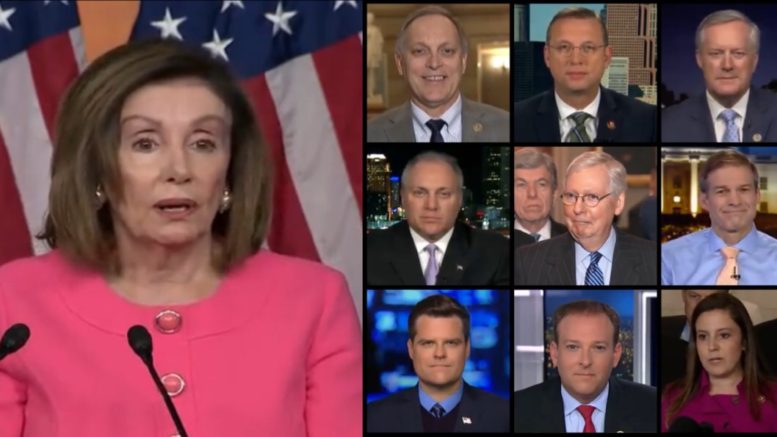 On Wednesday, House Speaker Nancy Pelosi (D-CA) announced during a press conference, the seven Democratic lawmakers who will serve as impeachment managers to present their case against President Trump in a Senate trial, after holding back the articles for nearly a month.

Shortly after, the Democratic-led House voted 228-193 to send the articles of impeachment to the Senate, clearing the way for a trial in the Senate.

Pelosi claimed the charges against the president will be a stain on his legacy, and in the same breath said it was solemn, but then, bragged that she was proud.

The managers Pelosi appointed include House Intelligence Committee Chairman Adam Schiff (D-CA) who will be the lead manager and House Judiciary Committee Chairman Jerrold Nadler (D-NY), whose committee drafted the articles of impeachment.

Republicans reacted to the announcement of the managers appointed and sending the articles to the Senate:

…The same Adam Schiff who has a track record of lying, who spread false allegations about collusion, who fabricated a call transcript during a hearing, and who lied about his dealings with the whistleblower. pic.twitter.com/w3HQXc6Z0v

Here is your split screen America. @realDonaldTrump signing a historic and significant part of a new trade deal with China and the Speaker of the House advocating for the #shampeachment. It's clear who's working to make America great and who's trying to tear it down. pic.twitter.com/tPOY1lE99i

President Trump fired back Wednesday after the House Speaker’s announcement writing: “Here we go again, another Con Job by the Do Nothing Democrats. All of this work was supposed to be done by the House, not the Senate!”

Here we go again, another Con Job by the Do Nothing Democrats. All of this work was supposed to be done by the House, not the Senate!

Great to see @realDonaldTrump fill yet another campaign promise & negotiate a great trade deal with China, something that the #DoNothingDemocrats didn't bother to even attempt for decades.

Today we saw @realDonaldTrump stand up for America & the American working class & strike a great trade deal, while the #DoNothingDemocrats continue their 3 year smear campaign of a President that is finally getting real things done.

Senate Majority Leader, Mitch McConnell (R-KY), tweeted: “It looks like today’s the day. House Democrats may finally stand behind the rushed, unfair, and nakedly partisan impeachment that they themselves delayed for four weeks. The ‘prosecutors’ have finally overcome their cold feet.”

It looks like today’s the day. House Democrats may finally stand behind the rushed, unfair, and nakedly partisan impeachment that they themselves delayed for four weeks. The ‘prosecutors’ have finally overcome their cold feet.

There it is folks. Pelosi admitted this is "an impeachment that will last forever."

It's all Dems care about. They never want it to end.

They're using Congress to get back at @realDonaldTrump for winning in 2016 and to try to stop him from winning in 2020. Nothing else.

The contrast is clear:

Meanwhile Dems are wasting more time on their impeachment charade.

It's obvious who's actually working for our country.

🚨 BREAKING → Dems finally voted to send their sham Articles of Impeachment to the Senate.

Among the people they chose to manage their phony case for them in the Senate are proven liar Adam Schiff and Jerry Nadler.

That tells you all you need to know about how serious this is.

Speaker Pelosi just reiterated House Democrats have a "strong case for impeachment,” yet they want a do-over in the Senate. #ShamImpeachment

Adam Schiff claimed Democrats have always had a sense of urgency, yet Speaker Pelosi held the articles for a month. #ShamImpeachment

.@RepAdamSchiff’s last minute info dump does nothing to change the 4 fundamental facts. https://t.co/RiCPjd3OLn

I see the Democrats' "urgency" talking point has returned… after they sat on their own impeachment articles for 4 weeks.#GiveMeABreak

There is it again. Remember: that's all this means to Democrats. They are trying to stick the President with a political scarlet letter.

House Democrats—who rammed through impeachment articles with no underlying crime (first time in history), didn't allow Trump ANY counsel during secret depositions, and gave POTUS ZERO chance to defend himself until the last minute—now want to talk about "fairness"#GiveMeABreak

Listen carefully to what Democrats are actually demanding when they talk about a "fair trial." They don't want a fair trial. They don't even really want a trial at all.

What they want is an open-ended *investigation.* Endless investigations is all they have, at this point.

The most relevant two witnesses on the Obstruction of Congress charge are Jerry Nadler and Adam Schiff. https://t.co/B5r88jHnUJ

HIstory is going to be so brutal to Pelosi on PROCESS & SUBSTANCE for ripping the US in 1/2 to pander to an enraged activist liberal base w/ this sham. Zelensky didn’t know there was a hold on $ until 8/29. The hold was lifted right after & Ukraine didn’t have to do anything new. https://t.co/uPmVvQzJq7

Democrats claim that their evidence against President @realDonaldTrump is "overwhelming," but their words, tone, & actions prove that they don't believe this to be true.

It's time to start this trial & further expose this baseless case for the farce it is. https://t.co/3XADzDEhiB

The radical left is impeaching @realDonaldTrump because they have no real agenda for the American people.