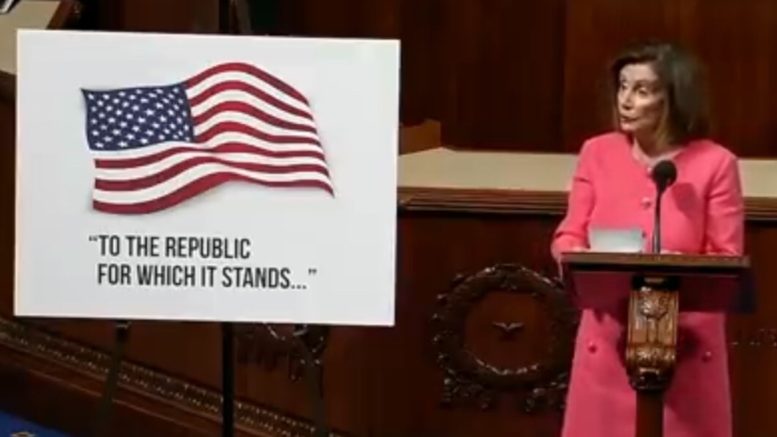 House Speaker Nancy Pelosi (D-CA) announced Wednesday, during a press conference, the seven Democratic lawmakers who will serve as impeachment managers to present their case against President Trump in a Senate trial, after holding back the articles for nearly a month.

Shortly after, Pelosi stepped to the podium in a floor debate before the House voted to send the articles of impeachment to the Senate, but repeatedly misquoted the transcript of the July 25 phone call between President Donald Trump and Ukranian President Zelensky.

While debating on the House floor Wednesday, Speaker Nancy Pelosi fudged the president’s words in the transcript by switching “us” to “me”.

“He could say to [Ukrainian President Zelenksy]– he could make– do me a favor,” Pelosi rambled. “Do me a favor? You paint houses too? What is this? Do me a favor.”

According to a White House memorandum of the July 25 phone call, President Trump said: “I would like you to do us a favor though because our country has been through a lot and Ukraine knows a lot about it. I would like you to find out what happened with this whole situation with Ukraine, they say Crowdstrike… I guess you have one of your wealthy people… The server, they say Ukraine has it.”

On Sunday, during an interview with George Stephanopoulos, Pelosi was pressed on why the Democrats didn’t go to the court to enforce its subpoenas for witnesses before they impeached, and she incorrectly claimed that Democrats are in the court for the witnesses related to the Ukraine events. (Continued Below)

“That isn’t even true. We are in court on the witnesses,” Pelosi falsely claimed, as the only two cases Democrats have pursued to the courts is Don McGahn and the Grand Jury information from the Mueller probe. “It could take a very long time,” she admitted.

In September, the House Intelligence Committee held a hearing to interview acting Director of National Intelligence Joseph Maguire pertaining to the July 25 phone call between the President’s, the transcript of that call, and the whistleblower complaint about the call.

During his opening, House Intelligence Chairman Adam Schiff (D-CA), fabricated the call transcript when he claimed, in part, “I’m going to say this only seven times, so you better listen good. I want you to make up dirt on my political opponent, understand, lots of it, on this and on that, I’m going to put you in touch with people.” (Video Below)

In December, President Trump tweeted: “Read the Transcripts! ‘us’ is a reference to USA, not me!”

Also in December, the president called out two congresswomen who misquoted the transcript before the House voted to impeach to him.

“Dems Veronica Escobar and Jackson Lee purposely misquoted my call. I said I want you to do us (our Country!) a favor, not me a favor. They know that but decided to LIE in order to make a fraudulent point! Very sad,” President Trump tweeted.

House Judiciary ranking member, Doug Collins (R-GA) took to Twitter after Speaker Pelosi misquoted the transcript and wrote: “Speaker Pelosi will do anything she can to tear down @realDonald Trump. Today on the floor, she once again misrepresented the president’s call with President Zelensky.”

Speaker Pelosi will do anything she can to tear down @realDonaldTrump.

Today on the floor, she once again misrepresented the president’s call with President Zelensky.

He was looking out for our country—not himself.

We leave you with Rep. Adam Schiff when he fabricated the transcript between President Trump and Ukrainian President Zelenksky:

Rep. Schiff re-writes the call transcript for added drama: "I’m going to say this only seven times, so you better listen good, I want you to make up dirt on my political opponent, understand, lots of it, on this and on that, I’m going to put you in touch with people" pic.twitter.com/1rV7BpEN6o