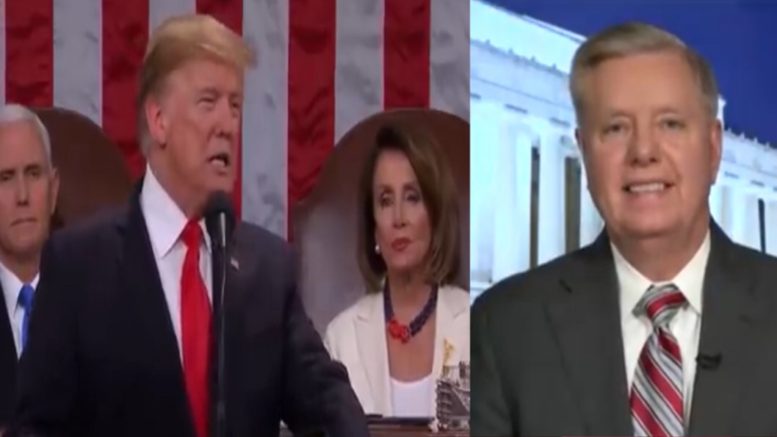 Senate Judiciary Chairman, Lindsey Graham (R-SC), spoke with host Sean Hannity on Fox News Wednesday predicting that President Trump will emerge from the Senate impeachment trial as “the strongest he has been politically”, adding, “the best is yet to come.”

Senator Graham’s comments came hours after House Speaker Nancy Pelosi (D-CA) put her signature on the articles of impeachment against President Trump, one month after the House impeached him, alleging that he abused his presidential power and obstructed Congress.

Asked how the impeachment process in the Senate will work, Senator Lindsey Graham replied, “The House will be able to make their case 24 hours, … then the defense team of the president will get to make their case based on the record established in the House. Then there will be an effort to call witnesses or ask for documents.”

“I hope nobody will be called as a witness because every witness being requested by the Democrats were available to the House, they chose not to call them. Executive privilege applies to all of these witnesses,” Graham said. “I’m hoping this can be done in about a week, and I predict a bipartisan acquittal of President Trump.”

The Senate Judiciary chairman responded to Pelosi’s announcement naming Senate Minority Leader Chuck Schumer as one of the impeachment managers who will prosecute the case in the Senate.

“Who is [Schumer] asking for?” Graham asked. “The national security advisor to the president, his chief of staff, his secretary of state, and the OMB director. [Those] are four people essential to any presidency and he could give a damn if Trump loses executive privilege. They just hate this guy so much, from the time he got elected to now has been an unending effort to destroy his presidency.”

Senator Graham also believes 2020 is going to be a “blow out”, saying, “What Nancy Pelosi did is spiked the ball at half time. The score on impeachment is 1-0, us. The lost one Democratic seat by impeaching the president. By the time the trial is over and we have an election in November, there’s gonna be a backlash. I will tell you why, most Americans zealously guard the right to pick their own leaders. I think they will hold it against politicians who tried to take that right away.”

“We’re gonna get the House back,” Graham continued, “… Keep the Senate majority … and President Trump will be reelected. And one of the reasons is the way [Democrats] conducted themselves.” (Video Below)

“The best thing for the American people is to end this crap as quickly as possible,” Senator Graham expressed. “Have a trial in the Senate, bipartisan acquittal of the president.”

“On February the fourth when the president comes into the house chamber to deliver the State of the Union, he will have been acquitted by the Senate; [President Trump] will be the strongest he has been politically. When it comes to Donald Trump, the best is yet to come,” he concluded. [Emphasis added].