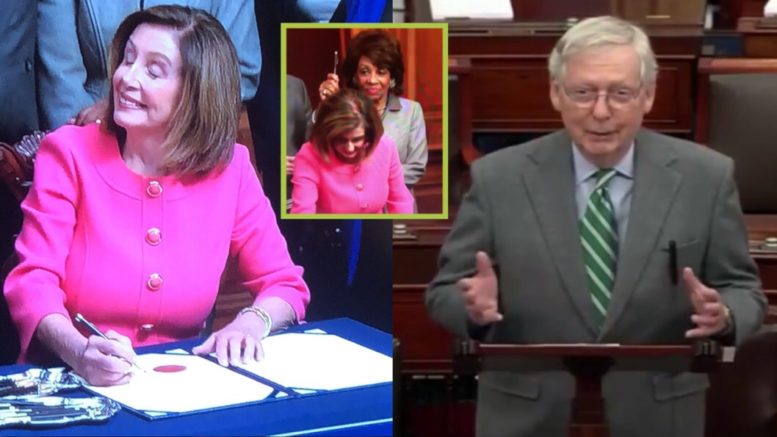 Senate Majority Leader, Mitch McConnell (R-KY), took to the Senate floor Thursday where he slammed Democrats after House Speaker Nancy Pelosi (D-CA) put her signature on the articles of impeachment against President Trump, one month after the House impeached him, alleging that he abused his presidential power and obstructed Congress.

Pelosi used multiple pens to complete the task, then she passed out the pens to various House Democrats who surrounded her, in what appeared to be a celebration. The “signing ceremony”, however, contradicted the House Speaker’s notion that impeachment is “solemn” and “somber.”

Senator Mitch McConnell took note of Speaker Pelosi’s “souvenir pens” which displayed her own golden signature and were brought in on silver platters.

“Speaker of the House, decided yesterday that a trial could finally go forward. She signed the impeachment papers,” Senator McConnell said.

“Golden pens on silver platters,” he sarcastically expressed. “A souvenir to celebrate the moment. Well, nothing says seriousness and sobriety like handing out souvenir pens as though this were a happy bill signing, instead of the gravest process in our Constitution.” (Continued Below)

The Senate Majority Leader went on to say: “This final display needly distilled the House’s entire process into one perfect visual.”

“It was transparently partisan performance from beginning to end,” Senator McConnell declared. (Video Below)

Yesterday, the Speaker celebrated impeachment with souvenir pens, bearing her own golden signature, brought in on silver platters. The House’s partisan process distilled into one last perfect visual. Not solemn or serious. A transparently political exercise from beginning to end. pic.twitter.com/AshajRLH2F

Nancy Pelosi’s souvenir pens served up on silver platters to sign the sham articles of impeachment…She was so somber as she gave them away to people like prizes. https://t.co/RMOiNeoMu0