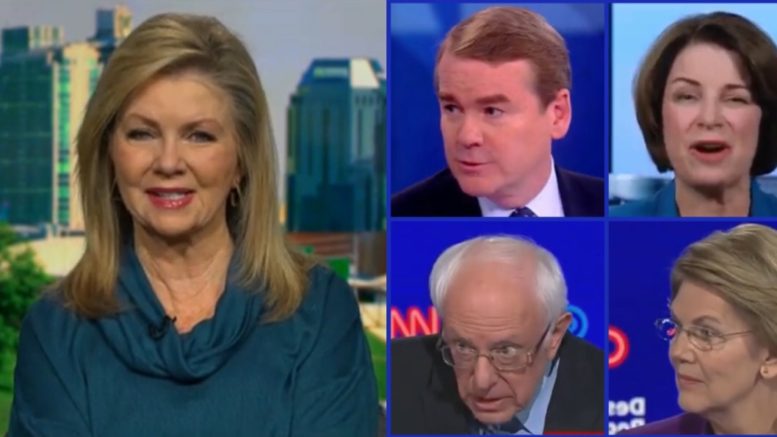 Senator Marsha Blackburn (R-TN) insists that Democratic Senators, who are running as presidential candidates; Elizabeth Warren (MA), Bernie Sanders (VT), Amy Klobuchar (MN), and Michael Bennet (CO), should recuse themselves from the Senate impeachment trial against President Donald Trump, on the grounds that they cannot be impartial.

“I think that there is a good precedent, it goes back to the 1868 trial of Andrew Johnson, who was a Tennessean, and calling for recusal from someone who would benefit,” Senator Blackburn told Fox Business host Maria Bartiromo on Friday.

“When you look at the fact that these four candidates are spending hundreds of hours and millions of dollars to defeat Donald Trump and they take an oath to provide impartial justice, I think that is a difficult standard for them to meet,” Senator Blackburn explained. “And I have recommended that this would be a good thing for them to step aside from the trial.”

Maria Bartiromo noted it’s “absolutely extraordinary” that the Senators are “running to take President Trump’s job”, adding, “And yet, they’re supposed to be considered jurists and independent-minded people to judge whether the president did anything wrong.”

Bartiromo agreed with the Tennessee Senator saying, “It’s pretty obvious what you’re saying is true. They’re not an independent factor here. They want to take the president down, and yet, it just feels like the whole thing, whether it’s the situation in the House when Adam Schiff read that thing– it was made up, wasn’t even the actual transcript, the call, or the rules being changed as [they] went along. And now, you have the Senate trial with four candidates for president sitting there.” (Continued Below)

Senator Blackburn responded: “That’s exactly right. And others in the room who did run, and have now suspended their campaign, but bear in mind, this has been a partisan impeachment from the get-go. They were going to get him on something. They said they were going to impeach him. Nancy Pelosi is fulfilling a commitment that she made and they are going to continue along this partisan line.”

The Tennessee Senator is also worried about the damage Democrats are doing the office of the presidency, to the institution, and to the country as a whole.

On Wednesday, Senator Blackburn tweeted: “@SenSanders, @SenWarren, @SenAmyKlobuchar, and @SenatorBennet are spending millions of dollars to defeat @realDonaldTrump, and we’re supposed to believe they will be impartial during the trial? They should recuse themselves.” (Video Below)

.@SenSanders, @SenWarren, @SenAmyKlobuchar, and @SenatorBennet are spending millions of dollars to defeat @realDonaldTrump, and we’re supposed to believe they will be impartial during the trial?

They should recuse themselves.

(Related: Senator Blackburn Doubles Down On Her “Vindictive Vindman” Remarks: “I Do Stand By The Tweet”)