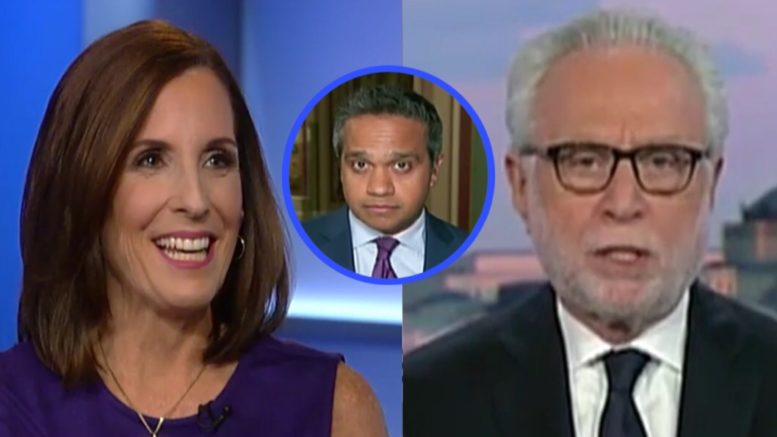 Senator Martha McSally (R-AZ) spoke with host Laura Ingraham on Fox News Thursday after the Arizona Senator called a CNN congressional reporter, Manu Raju, a “liberal hack”, when she was pressed whether recent developments would make her reconsider her position on impeachment against President Trump.

On Wednesday night, Rudy Giuliani’s Ukrainian associate Lev Parnas claimed that “Trump knew” about the events taking place in Ukraine. “President Trump knew exactly what was going on. He was aware of all my movements. I wouldn’t do anything without the consent of Rudy Giuliani or the president,” Parnas said.

CNN journalists defended Manu Raju insisting that he is not “biased”, and anchor Wolf Blitzer interviewed the reporter about the interaction.

Raju told Blitzer he has not received an apology from Senator McSally or her office. “If they did the right thing, she would personally call you and say ‘I’m sorry’ — it was an awful thing she did,” Blitzer said.

Senator McSally defended herself, saying “no” she doesn’t regret what she told Raju, and told Laura Ingraham that she “calls it like it is.”

“As you know, these CNN reporters around the Capitol, many of them are so biased. They are so in cahoots with the Democrats. They so can’t stand the president. They run around trying to chase Republicans and ask trapping questions,” the Arizona Senator said. (Continued Below)

“I’m a fighter pilot — I call it like it is. I’m gonna tell the truth, and I did it today. It’s laughable how they’ve responded ” she continued, noting that mainstream media reporters show a double standard in how they approach and ask questions to Democratic lawmakers versus Republicans.

Senator McSally also suggested CNN “has a lot of apologizing to do”, adding that they should be filing federal election paperwork with the Democratic National Committee”. (Video Below)

I'm a fighter pilot, I call it like it is and that's what I did today. pic.twitter.com/2PHc1fo2xo