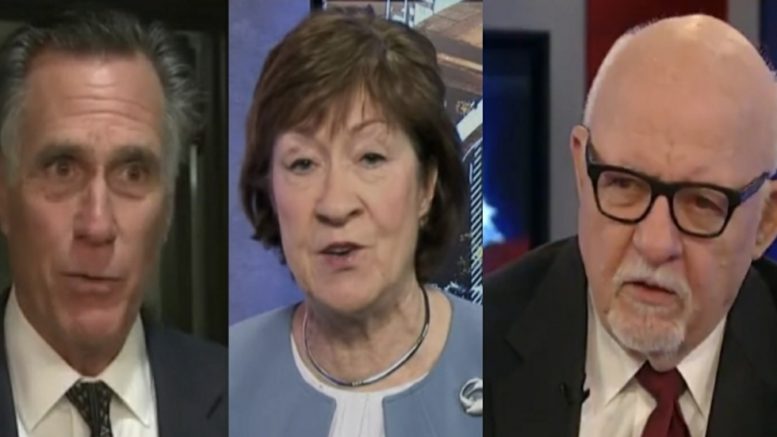 Republican strategist Ed Rollins dropped a warning for Republican senators Susan Collins and Mitt Romney in wake of the Senate impeachment trial that is set to begin on Tuesday.

Rollins thinks Sen. Collins will lose her seat Senator and Romney will suffer a “big drop” if either of them choose not to be “on board” with President Trump and Republicans over the course of the trial.

Sen. Collins, who is up for re-election in 2020 and is now the most disliked senator according to a new poll, has given mixed signals on how she stands on impeachment.

“She’ll be former if she basically leads the charge against this President on this impeachment hearing,” Rollins implied when asked by Lou Dobbs about Collins.

“It’s fine for her to have her conscience, but at the end of the day, this is a partisan battle,” Rollins said. “There is no crime and every Republican needs to be on board and support this President.” Video Below

Rollins then turned his attention to Mitt Romney, who also hasn’t signaled where he stands on impeachment, but it wouldn’t a surprise to see him go against President Trump given his past criticisms.

“If Romney basically wants to go against [Trump], then he’s gonna see a big drop beyond eight points,” Rollins declared. Video Below

RINO Ruin. @EdRollins predicts Sen. Collins will lose her Senate seat if she leads the charge against @POTUS in the impeachment trial. #MAGA #AmericaFirst #Dobbs pic.twitter.com/nMXSD9RYBQ