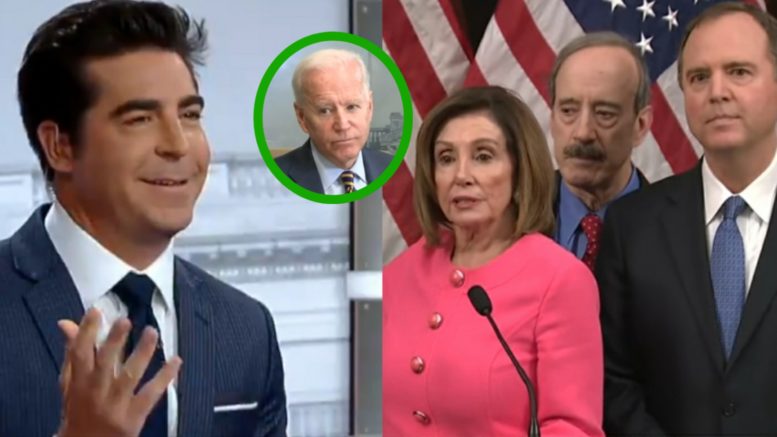 Jesse Watters gave his updated thoughts on impeachment during Thursday’s airing of The Five, where slammed House Speaker Nancy Pelosi’s decision to finally sign off on two articles against President Trump and transmitting them to the Senate

In his commentary, Watters mocked the most common excuses used by Democrats to justify impeachment, and he capped it off for the real reason why he thinks Pelosi decided to go through with it.

“She said she’s ‘sad’ and ‘somber’, and she’s wise-cracking, smiling and handing out souvenirs,” Jesse mentioned.

“It’s not like the President spied on an opposing presidential campaign,” Watters said in reference to Democrats’ allegation that Trump committed abuse of power.

“Obstruction,” he continued. “It’s not like he bleach-bitted 30,000 emails under subpoena. I mean, what do ya have?”

“Nancy says she cares so much about national security, ” Watters pointed out. “When in her career has she been tough on the Russians the terrorists? She wants the border to be like a sieve.” Video Below

“‘This is about the Constitution’ — really, Nancy? The First Amendment? Is it the Second Amendment? Due process? Speedy trial?” Jesse questioned. “Which one is it, Nancy?”

In regards to the claim that impeaching Trump was for election integrity, Watters said, “Really? Ok, then pass voter ID laws.”

“Or is she (Pelosi) just trying to pay back Trump for zeroing in on the Biden family shenanigans? That’s what this is all about,” he declared. Video Below

"Is She (Pelosi) trying to payback President @realDonaldTrump for zeroing in on the Biden family Shenanigans? That's what this is all about." #TheFive pic.twitter.com/egydAhVKSS