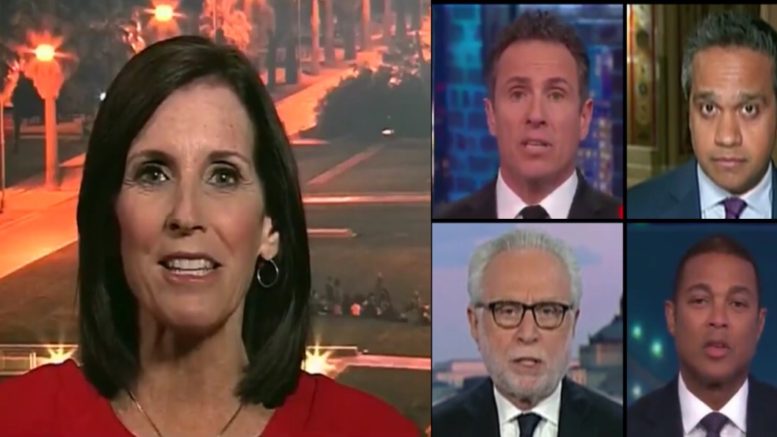 Senator Martha McSally (R-AZ) spoke with host Sean Hannity on Fox News Friday after the Arizona Senator called a CNN congressional reporter, Manu Raju, a “liberal hack”, when she was pressed whether recent developments would make her reconsider her position on impeachment against President Trump.

CNN journalists defended Manu Raju insisting that he is not “biased”, and anchor Wolf Blitzer interviewed the reporter about the interaction, then suggested that Senator McSally apologize. “If they did the right thing, she would personally call you and say ‘I’m sorry’– it was an awful thing she did,” Blitzer said.

Senator Martha McSally refused to apologize to the CNN reporter for calling him a “liberal hack”, and suggested CNN “couldn’t handle it”.

“I thought they were aware of it, but somehow they just check their journalism objectivity at the door, she continued.

“What’s been fascinating in response is they seem they are actually neutral. They think they’re objective, the Arizona Senator said, after CNN claimed the reporter was not biased. “And that is more troubling, that is just delusional how they’ve responded to this.” (Continued Below)

“Nevermind their hyperbolic words about you know, thinking ‘Did she just have a bad day? Was she emotional?’ No, I was a fighter piolet. This was a choice I made,” she said.

“I did not crumble under their pressure. … I decided to call a liberal, a liberal, and for whatever reason, they couldn’t handle it,” Senator McSally suggested.

On Friday, CNN’s Jake Tapper said that the Arizona Senator acted like a “punk” and she “did a disservice to herself” after calling a CNN reporter a “liberal hack”. (Video Below)

The most fascinating thing about the liberal media is that they think they’re neutral. Maybe they check their journalistic objectivity at the door. pic.twitter.com/v6jyQkSsYh

CNN's Chris Cuomo: Martha McSally acted like a "punk" and "did a disservice to herself" for calling a reporter a "liberal hack."

This is from a guy who threatened to throw someone down a flight of stairs because he thinks "Fredo" is the n word for Italians. pic.twitter.com/NWM9F22x47

(Related: Trump Humiliates Cuomo While Revealing Why He Watched CNN Over The Weekend: ‘Rudy Giuliani Took Fredo To The Cleaners’