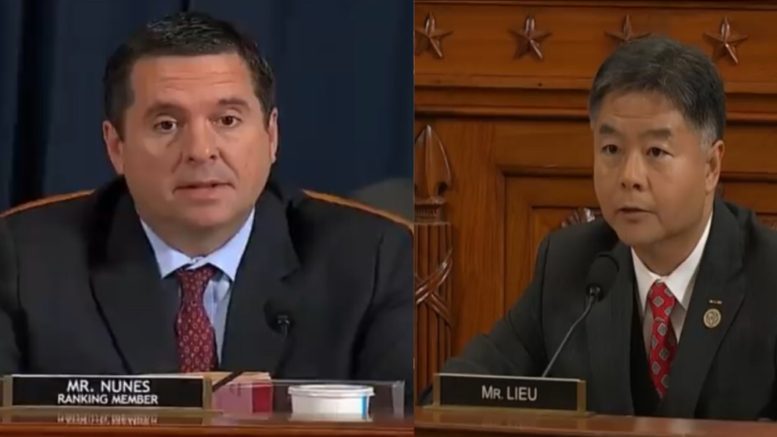 On Friday, Rep. Ted Lieu (D-CA) dismissed a lawsuit from his colleague, Rep. Devin Nunes (R-CA), telling a lawyer for the House Intelligence ranking member  to “shove it.”

Nunes threatened to sue Lieu if he did not apologize for saying last month that the House Intel ranking member conspired with an associate of Rudy Giuliani.

House Intelligence Chairman Adam Schiff (D-CA) leaked telephone logs from Parnas to Nunes in the House Intelligence Committee’s impeachment report, but Devin Nunes had previously said he “did not recall” ever speaking with Lev Parnas, and that the Intel committee receives many phone calls.

Ted Lieu took to Twitter Friday and posted the letter sent by Nunes’s lawyer and alongside it, posted a responding letter to the House Intel ranking member’s lawyer.

“I received your letter dated December 31, 2019, in which you state your client Congressman Devin Nunes will sue me if I don’t, among other actions, issue a public apology to Devin Nunes,” Lieu wrote in his letter. “It is true that I stated Congressman Nunes worked with Lev Parnas and conspired to undermine our own government.”

“I welcome any lawsuit from your client and look forward to taking discovery of Congressman Nunes. Or, you can take your letter and shove it,” Lieu said.  (Continued Below)

Lieu pointed to recent evidence released by the House in its impeachment investigation and Parnas’s MSNBC interview earlier this week, noting Parnas and Nunes communicated amid efforts by Trump allies to convince Ukraine to investigate his political rivals, reported The Hill.

In December, Rep. Nunes sued CNN for defamation accusing the cable network of publishing a “demonstrably false hit piece” about him

The 47-page lawsuit, filed in the United States District Court for the Eastern District of Virginia, accuses the liberal network of publishing “numerous egregiously false and defamatory” statements about Nunes on Nov. 22, 2019 when journalist Vicky Ward reported claims that Nunes met with Ukranian prosecutor, Viktor Shokin, in Vienna in 2018 to dig “up dirt” on Hunter and Joe Biden, Fox News reported. (Video Below)

“CNN is the mother of fake news. It is the least trusted name. CNN is eroding the fabric of America, proselytizing, sowing distrust and disharmony. It must be held accountable,” the lawsuit states.

Attached is the first page of a five page letter in which the lawyer for @DevinNunes threatens that Rep Nunes will sue me.

Attached is my response. pic.twitter.com/bWAqdRhq97

This is why @CNN is defying a Federal Judge…@ATT refuses to do anything… Major companies in the USA ignoring court orders is a horrible precedent. Board members of @ATT need to be held accountable by the court. https://t.co/Cj2qOqqtci