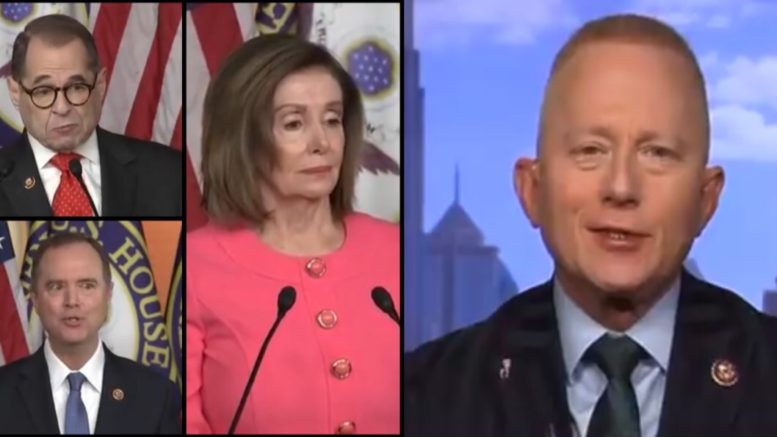 The day after President Trump was impeached by the Democratic-led House, he welcomed Congressman Jeff Van Drew to the White House to celebrate the freshman lawmaker’s decision to switch to the Republican Party and offer his endorsement. The meeting occurred after Van Drew voted against both articles of impeachment– as a Democrat.

Van Drew spoke with Fox News Sunday, amid impeachment beginning in the Senate on Tuesday, declaring that both articles of impeachment the House passed are “very weak”.

Asked what he expects to see in the Senate trial this week and if he thinks House Speaker Nancy Pelosi (D-CA) will continue subpoenaing witnesses after the Senate trial is over, Rep. Van Drew declared, “The House had its time. They have spent months and months and months of reports, of investigations, millions upon millions of dollars and we finally– the House came up with two articles of impeachment both of which are very weak.”

“I will say this and I will say it over and over again because I think people must understand how important it is: impeachment is a tool that is not meant to be used anywhere near a regular basis,” the New Jersey congressman said.

“Our founding fathers almost disliked [impeachment]. It was said even by [Alexis] de Tocqueville, a famous Frenchman who loved America that when impeachment was used too often, that it was a sign of the degeneration of the country and the breakdown of the United States of America,” he continued.

“We cannot have political impeachments,” Van Drew insisted. (Continued Below)

President Trump is planning to go to New Jersey in Van Drew’s district on, Tuesday, January 28 for a rally at the Wildwoods Convention Center.

Asked what has been the reaction in the Garden State since the New Jersey congressman switched parties and the reaction of the President visiting, Van Drew expressed, “I’m proud to say for his event of all the events he’s done, in all of the country, we ‘ve had the most ticket requests.”

(Related: Kevin McCarthy On Rep Van Drew Reportedly Expected To Join Republican Party: “We Would Support Him & We Would Welcome Him To Join”)