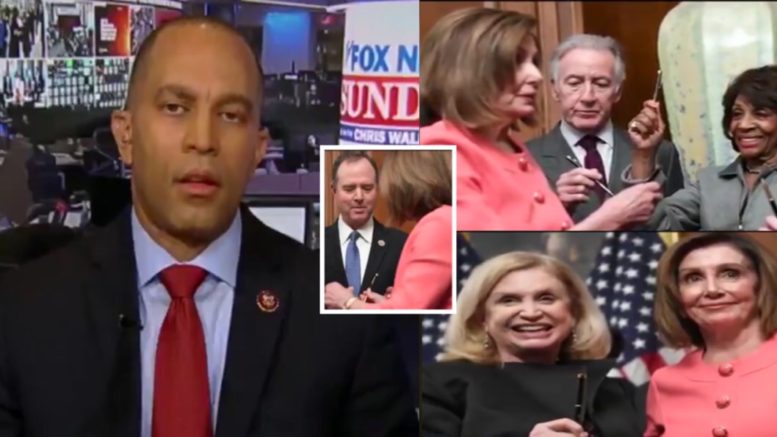 House Speaker Nancy Pelosi (D-CA) signed the articles of impeachment in peculiar fashion on Wednesday as she used multiple pens to complete the task. She then passed out the pens to various House Democrats who surrounded her, in what appeared to be a celebration.

Sunday on Fox News, host Chris Wallace spoke with Rep. Hakeem Jeffries (D-NY) and confronted him over Democrats’ celebrating during the impeachment signing after the “signing ceremony” contradicted Pelosi’s notion that impeachment is “solemn” and “somber”.

“House Speaker Pelosi, who’s been saying for weeks that she takes no joy in the impeachment of Donald Trump. She used the words that you’ve used, ‘solemn, sober, serious,'” Chris Wallace told Rep. Jeffries.

Wallace proceeded to play a clip of the House Speaker who had said, “This is a very serious matter and we take it to heart in a really solemn way.” Then, he displayed pictures of Democrats holding up the pens Pelosi handed and it showed Democrats smiling.

“As we can see, all the participants look pretty happy. Doesn’t that blow a hole in your narrative that the Democrats aren’t enjoying the impeachment and the effort to remove this president?” Wallace asked Rep. Jeffries.

“I was at the ceremony, and there was no joy in that ceremony,” the New York congressman claimed. (Continued Below)

“There was no joy in that ceremony,” Rep. Jeffries again claimed. “And from the very beginning through the end, Pelosi has been clear. We are gonna proceed in a very serious and solemn and sober fashion.”

Wallace interjected to say: “But you’ve also been talking impeachment, a lot of your members since he took the oath of office.”

Rep. Jeffries once more claimed: “We don’t dislike Donald Trump, but we do love America. We do love democracy. We do love the Constitution. And in America, no one is above the law, not even the president of the United States. George Washington in his farewell address said, ‘The Constitution is sacredly obligatory upon all’. That means everyone.

Hakeem Jeffries will serve as one of the impeachment managers to present the case against President Trump in a Senate trial. (Video Below)