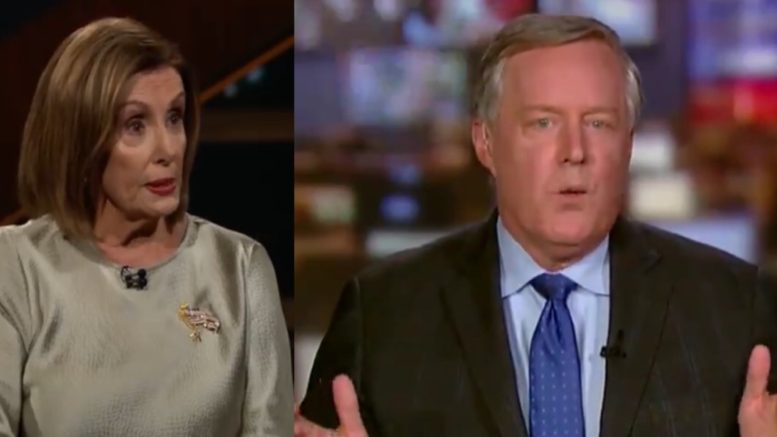 Meadows argued that the articles of impeachment should be dismissed, saying that “it’s the first time there is not an underlying crime” in a presidential impeachment trial.

Judge Jeanine began by telling Rep. Meadows that House Speaker Nancy Pelosi (D-CA) admitted she held back the articles of impeachment from the Senate for almost a month to “force Republicans to call witnesses”, adding, “Now the ball is in their court to do or pay a price,” Pelosi said.

Congressman Meadows thinks the narrative continues to change with Pelosi and wondered: “Maybe she was waiting for all those impeachment pens to arrive on special order.”

“More importantly than that, if she was serious about calling witnesses, then why didn’t she subpoena the very witnesses she’s talking about bringing forth in the Senate? She actually withdrew the subpoenas. She’s not serious about it judge. But we do know that it’s going to go to the Senate and it should be dismissed,” Rep. Meadows argued.

He noted that “one of the things Republicans are hearing” is that Senator Josh Hawley (R-MO) is making an announcement that he believes there should be an amendment to dismiss the case. “The main way that you make this so that it does not become a circus is to have that not only at the beginning of this trial but throughout this process. Because I think our Senators are going to find there is not a case here,” Meadows said. (Continued Below)

Judge Jeanine agreed with Rep. Meadows saying the Senators “should make the motion to dismiss after Adam Schiff and that lying pack of House managers don’t prove a case.”

“It’s the first time there is not an underlying crime and actually some of my Senate colleagues pointed that out. We were having some discussions and they said, ‘Where’s the underlying crime?’ It’s just not there. But more importantly than that, Adam Schiff continues to tell one falsehood after another and trying to spin a narrative that would suggest this president did something inappropriate,” the North Carolina congressman said.

He pointed out that he has seen the evidence and was in the depositions adding, “The Senators will reach the same conclusion that we reached– that there is just not a case there.” (Video Below)

“This is a sad day for America, but it will be a good day soon,” he added.

.@RepMarkMeadows argues tonight that the articles of impeachment should be dismissed and says that “it’s the first time there’s not an underlying crime” in a presidential impeachment trial. pic.twitter.com/Jpg5qFFCCp

Democrats said impeachment was “urgent,” and then sat on their own articles for 4 weeks

They insisted it was “somber,” and then handed out commemorative pens and posed for pictures

The hypocrisy is overwhelming