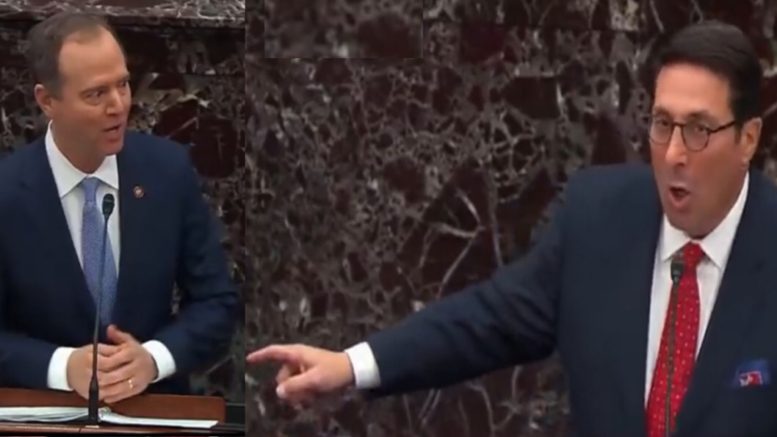 “Senator Schumer said earlier today that the eyes of the founders are on these proceedings. Indeed, that’s true, but it is the heart of the Constitution that governs these proceedings,” Sekulow said.

“What we just heard from manager Schiff– the courts have no role, privileges don’t apply, what happened in the past, we should just ignore. In fact, manager Schiff just tried to summarize my colleague’s defense of the president. Not in those words, of course, which is not the first time Mr. Schiff has put words into transcripts that did not exist,” Jay Sekulow stated.

“Mr. Schiff also talked about a trifecta,” he continued. “I’ll give you a trifecta.”

“Mr. Schiff did say the courts don’t really have a role in this. Executive privilege, why would that matter?” he asked. “It matters because it’s based on the Constitution of the United States.” (Continued Below)

(Related: Pat Cipollone Steps To The Podium & Rips Dems Case For Impeachment: “They Are Here To Steal Two Elections”)

Sekulow then pointed out that one of the managers, appointed by Speaker Pelosi, had claimed that it is the “Senators who are on trial”, adding that the same manager also said of the Senators, “They are not capable of abiding by [their] oath.”