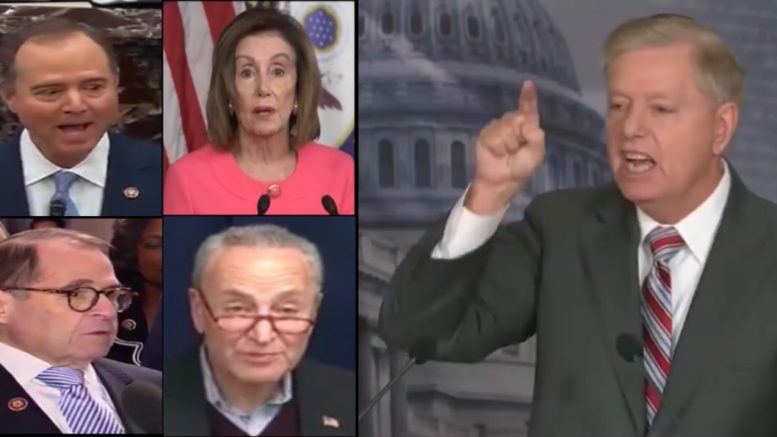 Senate Judiciary chairman, Lindsey Graham (R-SC), unloaded on Democrats on Wednesday during a press conference for the way they have been handling the impeachment process in the Senate.

“If I were the president, I wouldn’t cooperate with these guys at all,” Senator Graham declared.  “Schiff, Nadler, and Pelosi impeached this president in 48 days.”

“I wouldn’t give them the time of day,” Sen. Graham expressed. “They’re on a crusade to destroy this man, and they don’t care what they destroy in the process of trying to destroy Donald Trump. I do care.”

“So, to my Democratic colleagues, you can say what you want about me, but I’m covering up nothing. I’m exposing your hatred of this president to the point that you would destroy the institution. Nobody would be saying this about a Democratic president if a Republican House had done this. … It shows you how complicit people have become when it comes to Trump,” Graham told reporters.

He went on to blast the press for not asking “one question about the idea that the Democratic-controlled House, in 48 days, impeached the president of the United States with a process where you couldn’t call a lawyer or a witness. And hold it against him because he wants to object turning over documents to them.”

“You would be all over us,” Graham told the press. “So let me tell you what’s gonna happen in November: this won’t matter much. People are gonna judge the president by what he’s done and can do. And they’re gonna look at the Democratic alternative and ask, “Will I be better off with this person versus Trump?'” (Continued Below)

Senator Graham said that he is going to “remember this”, adding, “I’m gonna remember this for a very time. No good deed goes unpunished around this place.”

He also slammed Democrats for trying to “railroad” President Trump after the Mueller report came out, saying he will “not be part” of destroying the presidency over time.

“And you need to ask yourselves some questions,” he told the press. “Would you be asking different questions if this were a Democratic president? [Be]cause I remember Clinton very well. We got challenged, rightly so– about what we were doing and why we were doing it. So, I wouldn’t cooperate at all with these people,” Senator Graham added. (Video Below)