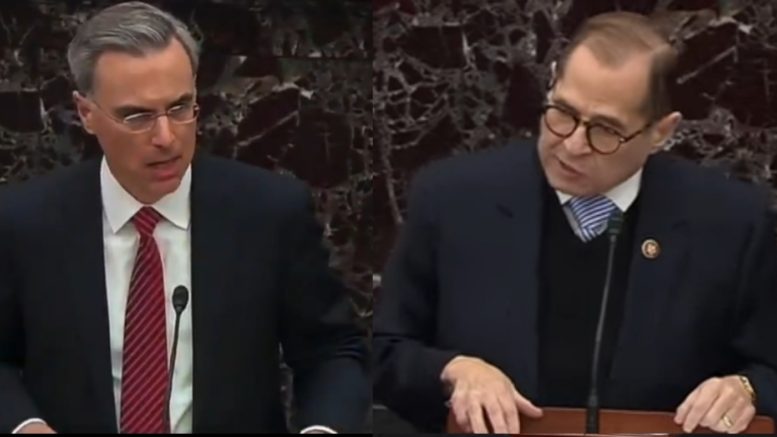 While debating Senator Chuck Schumer’s proposed amendment that would lead to the immediate subpoena of former National Security Advisor John Bolton, Nadler said that it was “embarrassing” to see senators “voting for a coverup” as seven prior amendments from Schumer were shot down.

“Will you vote to allow all the relevant evidence to be presented here? Or will you betray your pledge to be an impartial juror?” he questioned.

Nadler continued, “Will you bring Ambassador Bolton here? Will you permit us to present you with the entire record of the president’s misconduct? Or will you instead choose to be complicit in the president’s coverup? So far I’m sad to say I see a lot of senators voting for a coverup, voting to deny witnesses, an absolutely indefensible vote, obviously a treacherous vote.”

White House counsel Pat Cippilone fired back at Nadler upon returning to the floor, which sparked Justice Roberts to step in. Video Below

“We’ve been respectful of the Senate,” Cippilone said. “We’ve made our arguments to you. And you don’t deserve, and we don’t deserve, what just happened.”

“The only one who should be embarrassed, Mr. Nadler is you, for the way you’ve addressed this body. This is the United States Senate. You’re not in charge here,” he declared.  Video Below

Cipollone shuts down Nadler: “the only one who should be embarrassed, Mr. Nadler, is you”https://t.co/1setFDrjUG pic.twitter.com/JifMyyQIHW

Cippilone then turned attention to the entire “farce” impeachment process and told Nadler, “You owe an apology to the American people.”

“It’s about time we bring this power trip in for a landing,” Mr. Cippilone said.

Moments later, Chief Justice Roberts stepped in and warned both sides to “remember where they are.

We leave you with that short clip:

“I do think those addressing the Senate should remember where they are.” pic.twitter.com/3KP8Q9ZyJ3