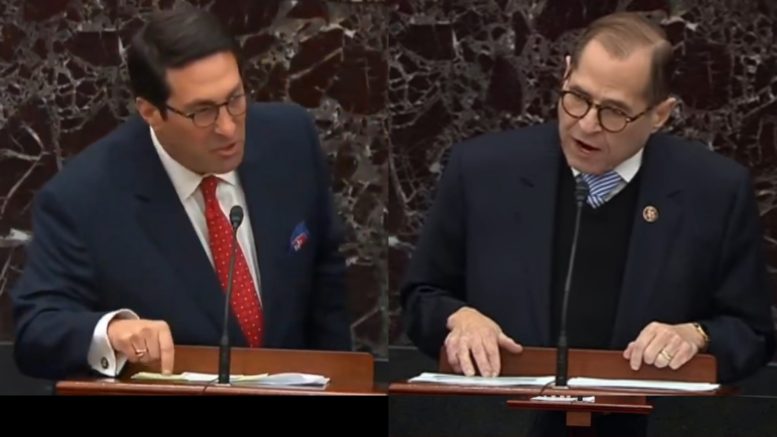 While debating Senator Chuck Schumer’s proposed amendment that would lead to the immediate subpoena of former National Security Advisor John Bolton, Nadler suggested that President Trump used executive privilege “and other nonsense” to conceal evidence that he said was crucial to investigations conducted by House committees.

“President Trump has been impeached for placing his political interests ahead of our national security,” Nadler said in his floor speech right after the clock struck midnight. “It is imperative, therefore, that we hear from the National Security Advisor who witnessed the President’s scheme from start to finish.”

He continued, “To be clear, the record as it stands, supports both articles of impeachment. It is beyond argument that President Trump mounted a sustained pressure campaign to get Ukraine to announce investigations that benefitted him politically and then tried to cover it up. The President does not seriously deny any of these facts.”

“The only question left is this: Why is the President so intent on concealing the evidence and blocking all documents and testimony today? Only guilty people try to hide the evidence,” Nadler said before telling the Senate that they are “on trial in the eyes of the American people” in terms of how they choose to vote during the impeachment proceedings.

Upon returning to the Senate floor, Jay Sekulow lashed out at Nadler over his remarks. Video Below

“Chairman Nadler talked about treacherous,” Sekulow stated. “At about 12:10 a.m., January 22nd, the chairman of the Judiciary Committee at this body, on the floor of this Senate, said ‘executive privilege and other nonsense’.

Then, while turning to Mr. Nadler, Sekulow said, “Now, think about that for a moment. Executive privilege and other nonsense. Mr. Nadler, it is not nonsense. These are privileges recognized by the Supreme Court of the United States, and to shred the Constitution on the floor of the Senate, to serve what purpose? The Senate is not on trial. The Constitution doesn’t allow what just took place.”

“Only guilty people try to hide evidence?” Sekulow asked. “So, I guess when President Obama instructed his Attorney General to not give information, he was guilty of a crime. That’s the way it works, Mr. Nadler?” Video Below

Related Article: Nadler Says It’s ‘Embarrassing’ That Senators Are Voting For A ‘Cover Up’, Cippilone Fires Back: “The Only One Who Should Be Embarrassed, Is You”