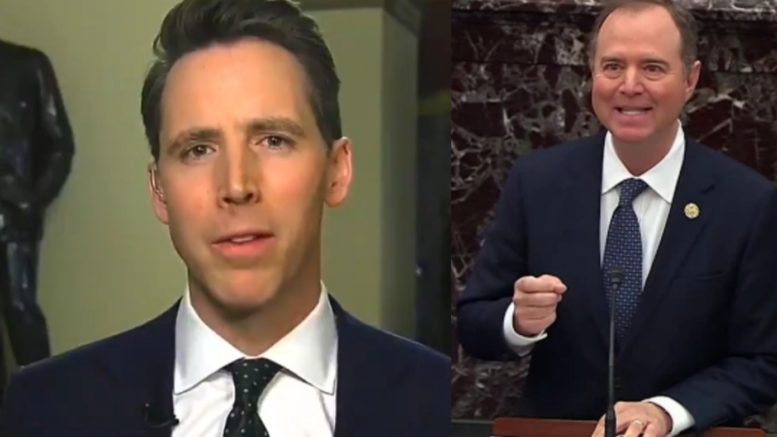 After sitting through three days of the Senate trial, Senator Josh Hawley (R-MO) does not think Democrat impeachment managers are “trying to convince Senators” on their case against President Trump. Instead, he thinks they’re really just “playing to their own bases, their own audiences at home.”

Senator Hawley made the assessment while appearing for a brief interview on Fox News.

“I think what you saw is a lot of grandstanding, a lot of playing to the camera,” Hawley said as he used Rep. Adam Schiff as an example.

“You can certainly say that Mr Schiff is acutely aware of when he’s on prime time television. He referenced to being on California TV a couple of times yesterday,” Sen. Hawley pointed out. “It’s become something of an open joke among the senators.”

He continued, “…At this point, I don’t sense them actually trying to convince Senators. I think they’re playing to their own bases, their own audiences at home.”

Hawley then shifted his focus to controversial remarks made by Nadler early in the proceedings, where he insinuated that GOP Senators were “part of the cover-up” and refusing to call Democrat witnesses would be a “treacherous vote against the United States”.

“I think that that’s the spin. They’re headed there. That’s…gonna be the party line, and I predict that they’ll soon all be saying it,” he concluded. Video Below

.@HawleyMO: the Democrats' impeachment case is just “a lot of grandstanding, a lot of playing to the camera”https://t.co/SS7FlPpxv2 pic.twitter.com/gz0VsTU0Yt