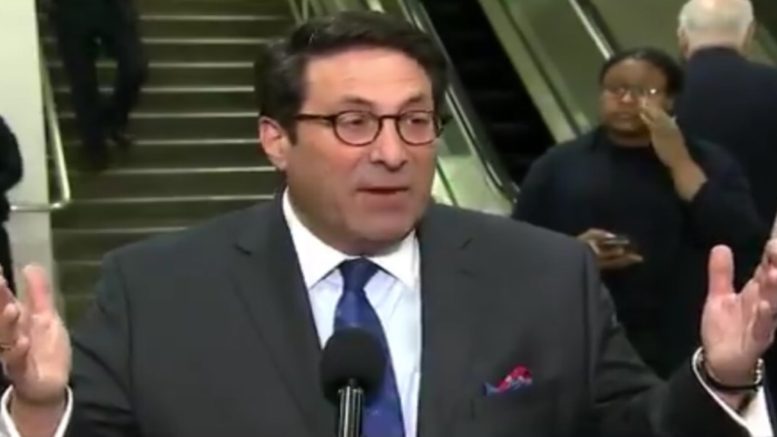 Jay Sekulow, chief counsel for President Trump, spoke to the press Friday and wondered what Democrats’ motives were upon “opening the door” into Joe and Hunter Biden.

“For the life of me, they’ve done it, and why they opened up the door as wide as a double door on the Hunter Biden, Joe Biden, Burisma issue– I guess they figured that was their way of getting ahead of it. We will address it,” Sekulow told the press.

“I want you to think about this for a moment: Joe Biden was charged as vice president of the United States with the Ukraine policy. That was his specific charge. His son went to work for the board of a Ukrainian gas company,” Jay Sekulow said.

“First, [Joe Biden] said he knew nothing about it, but the State Department knew about it because they were concerned when people were being put up for confirmation that that issue might arise. So believe me, you’ll hear about that issue too [during the trial],” he added.

In November, Rep. Elise Stefanik (R-NY) questioned Marie Yovanovitch, the former U.S. ambassador to Ukraine, during the impeachment inquiry on the role of former vice president Joe Biden’s son Hunter’s position on the board of Burisma.

“But let’s take the step back. The first time you personally became aware of Burisma was actually when you were being prepared by the Obama State Department for your Senate confirmation hearings. And this was in the form of practice questions and answers. This was your deposition and you testified in this particular practice ‘Q & A’ with the Obama State Department, it wasn’t just generally about Burisma and corruption, it was specifically about Hunter Biden and Burisma. Is that correct?” Stefanik asked, to which Yovanovitch answered, “Yes, it is.”

“And the exact quote from your testimony, Ambassador is: ‘The way the question was phrased in this model ‘Q & A’ was what can you tell us about Hunter Bidens… you know being named to the board of Burisma.’ So for the millions of Americans watching, President Obama’s own State Department was so concerned about potential ‘conflict of interest from Hunter Biden’s role at Burisma’ that they raised it themselves while prepping this wonderful Ambassador nominee before her confirmation,” Stefanik announced.

“And yet, our Democratic colleagues and the Chairman of this committee, cry foul when we dare ask that same question that the Obama State Department was so concerned about. But we will continue asking it,” she added. (Video Below)

Sekulow: Democrats "opened up the door as wide as a double door on the Hunter Biden, Joe Biden, Burisma issue”https://t.co/lCPPRs7D5U pic.twitter.com/EpEOujMHdY

We leave you Senator Lindsey Graham (R-SC) on the Bidens:

(Related: Sekulow Lashes Out At Nadler After He Implies Trump Is Guilty Cause He Tried To “Hide Evidence”: “Is That The Way It Works, Mr. Nadler?”)