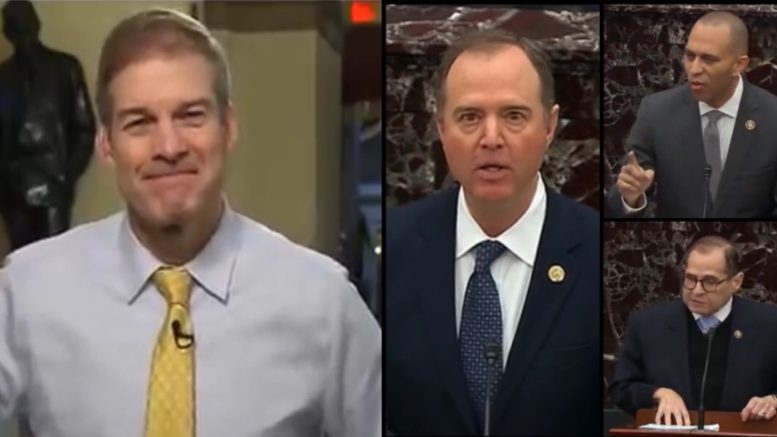 Rep. Jim Jordan (R-OH) spoke with Fox News’ Ed Henry Friday and slammed House manager Adam Schiff for remarks he made on the Senate floor against President Donald Trump. He also believes the trial could be wrapped up by the end of next week because of “four fundamental facts”.

Ed Henry played clips of Adam Schiff arguing his case for the removal of President Trump, declaring that “truth matters”.

“If the truth doesn’t matter, we’re lost. … No Constitution can protect us. Right doesn’t matter anymore. If you find him guilty, you must find that he should be removed because right matters and the truth matters. Otherwise, we are lost,” Schiff claimed.

Reacting to Schiff’s comments, Rep. Jim Jordan fired back saying that “the facts are on the president’s side” in relation to the Constitution and process.

“The anonymous whistleblower who started it all, with no first-hand knowledge, who had a bias against the president, according to the inspector general and who worked with Joe Biden– the guy who wrote the complaint, who said on the bullet point #1 of the complaint, over the past four months, he said on the complaint ‘over half a dozen officials have informed me of this effort.’ Who are these officials … who had the first-hand knowledge? We don’t know if they even exist because we never got to talk to them,” Rep. Jordan explained.

Congressman Jordan said he doesn’t know if they even interviewed the whistleblower during the depositions in the House, but insisted there are “four fundamental facts that will not change on the president’s side.” (Continued Below)

Asked if he thinks the Senate trial will end to acquit the president without witnesses, Rep. Jordan replied, “The only side that’s put on the case so far is are the Democrats, the prosecution team, the House managers. And you see no Republican Senators talking about the need for witnesses and we haven’t even heard from the president’s team. They haven’t even made their case yet.”

Jordan believes the facts are “so strong” for the president and feels confident that “next week” the trial will be over.

“When [the Democrats] are talking this long and don’t seem to move anyone, the American people don’t seem to be tuning in to this as much as we might have anticipated. I think again, it looks good for the president and these core arguments are all strong for him. The idea that we have the transcript, President Zelenksy and President Trump repeatedly said there was no pressure, no linkage of an investigation to the dollars. The Ukrainians didn’t even know aid was held at the time. And most importantly, they took no action to get the aid released. (Video Below)

(Related: Sen. Scott Rips Democrats’ Case On The ‘Fourth Groundhog Day” Of The Senate Trial: “Not A Single Piece Of New Information Has Come Forward”