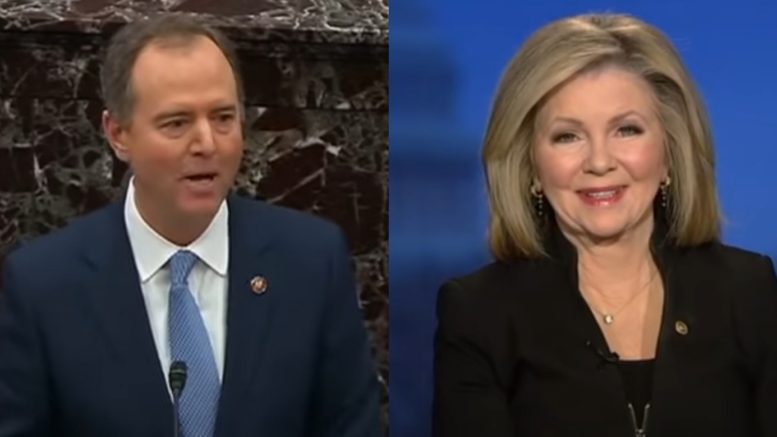 During his closing arguments, House Intel Chairman Adam Schiff suggested GOP Senators were warned their “head will be on a pike” if they voted against President Trump in the Senate impeachment trial.

“CBS reported last night that a Trump confidante said that GOP Senators were warned ‘vote against your President, vote against the President and your head will be on a pike,'” Schiff said.

Republican Senator Marsha Blackburn denied ever being warned in the manner that Schiff laid out, and she confirmed that her fellow senators, including Lisa Murkowski and Susan Collins, turned their heads and gasped after hearing the notion alleged by Schiff.

Senator Blackburn said, “Republican leadership has encouraged us to do exactly what we’ve been doing…to look back through the record of the House and to do our due diligence so that the decisions we make are going to be wise decisions, to make certain that we’re true to the Constitution that we are going to render a fair trial to all involved. And that’s exactly what we’ve been doing.” Video Below

“The reaction on the floor was exactly as was reported,” she asserted in reference to Senators gasping and turning their heads by Schiff’s accusation. “There were several of us that just said ‘That’s not true.’ And he should have retracted that at that point in time.”

“And, of course, we bear in mind that they told us what their entire purpose is. It’s to relitigate the 2016 election, to keep him off the ballot in 2020, to make certain that the American people don’t have the opportunity to vote for him again,” Senator Blackburn concluded. “I thought Adam Schiff’s remarks were astounding…” Video Below