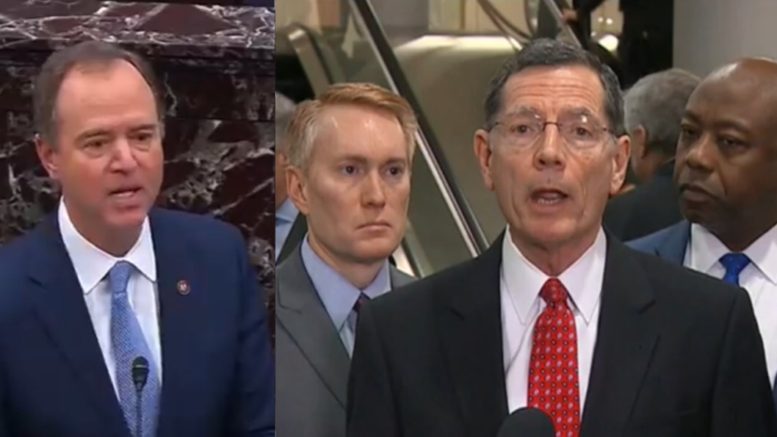 Senator John Barrasso (R-WY) spoke to the press Saturday after President Trump’s legal team took to the Senate floor in defense of the president against the Democratic-led impeachment charges.

Barrasso gave a description of House manager Rep. Adam Schiff’s face when the president’s counsel read the transcript of the July 25 phone call between Ukrainian president Volodymyr Zelensky and President Donald Trump, then played a video of Schiff when he fabricated his own version of the call during a congressional hearing.

Today we heard a presentation that was strong and that was clear,” Senator Barrasso described. “And completely undermined the case of the Democrats and truly undermined the credibility of Adam Schiff. The most effective thing that happened was when they first read–this is the president’s counsel first read the transcript of the phone call with the president of the United States and the president of Ukraine, and then played the video of Adam Schiff with his fictionalized made-up script.”

Barrasso told the press that he had witnessed Schiff’s reaction when the video was played for all of the Senate to watch.

“From where I was sitting, I know the press couldn’t see his face, but the blood drained from Adam Schiff’s face as they played that video and his made-up words,” the Wyoming Senator disclosed to reporters.

On Saturday, White House deputy counsel to President Donald Trump, Mike Purpura, played a video clip of Schiff reading the supposed transcript of President Trump’s July 25 phone call with Ukraine’s president Zelensky, to which he later called a “parody” and also suggested the president had directly asked Zelensky for “dirt” on his political opponent.

“There are very few things, if any, that can be as grave and as serious. Let’s stick with the evidence. Let’s talk about the facts and the evidence in this case,” Purpura recommended. (Video Below)

The blood drained from Adam Schiff’s face as they played that video. pic.twitter.com/IYHtgJroqg