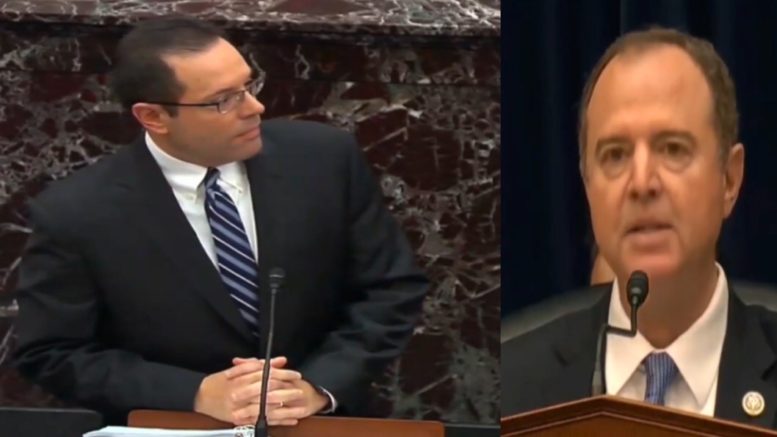 Purpura played a video clip of Schiff reading the supposed transcript of President Trump’s July 25 phone call with Ukraine’s president, Volodymyr Zelensky. In the clip, Schiff fabricated the substance of the call, to which he later called a “parody” and also suggested the president had directly asked Zelensky for “dirt” on his political opponent.

“Well, it begins like a classic, organized crime shakedown shorn of its rambling character and in not so man words this is the essence of what the president communicates. We’ve been very good to your country, very good. No other country has done as much as we have. But you know what? I don’t see much reciprocity here,” Rep. Adam Schiff said during a hearing with acting Director of National Intelligence, Joseph Maguire in September.

“I hear what you want; I have a favor from you, though. And I’m gonna say this only 7 times, so you better listen good. I want you to make up dirt on my political opponent, understand? Lots of it on this and on that. I’m gonna put you in touch with people and not just any people. I’m gonna put you in touch with the Attorney General of the United States– my Attorney General, Bill Barr,” Schiff continued as he exaggerated the phone call.

“He’s got the whole weight of the American law enforcement behind him. And I’m gonna put you touch with Rudy. You’re gonna love him, trust me. You know what I’m asking, so I’m only gonna say this a few times in a few more ways. And by the way, don’t call me again, I’ll call you when you’ve done what I’ve asked. This is some in character what the president was trying to communicate,” Schiff claimed.

“And we can shrug it off and say we were making light, or a joke,” Purpura said of Schiff fabricating the July 25 phone call. “But that was in a hearing in the United States House of Representatives discussing the removal of the President of the United States from office,” the deputy White House counsel to President Donald Trump explained.

“There are very few things, if any, that can be as grave and as serious. Let’s stick with the evidence. Let’s talk about the facts and the evidence in this case,” Purpura recommended. (Video Below)