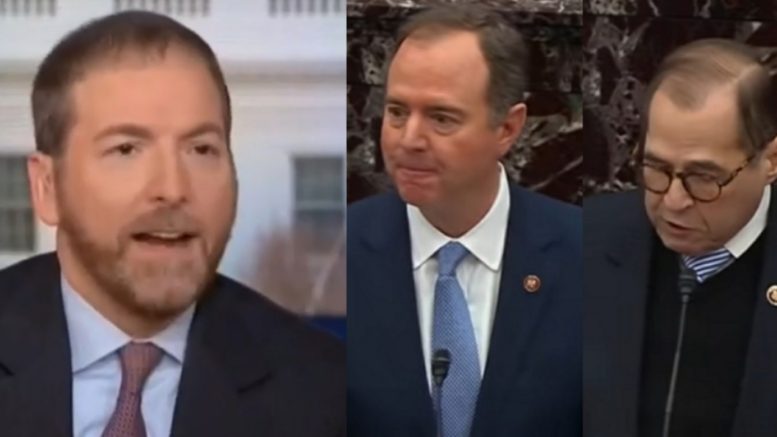 MSNBC’s Chuck Todd briefly weighed in on Democrats’ apparent lack of enthusiasm on impeachment now that it’s in the hands of the Senate.

Todd quoted part of an article by columnist Maureen Dowd of The New York Times, who wrote about an unidentified male Democratic Senate staffer mourning the “apathy” felt within his party.

“One Democratic Senate staffer mourned the apathy. ‘Our phones aren’t ringing,’ he told me. ‘Nobody cares. It’s the saddest thing ever.'”

In his reaction to Dowd’s article, Mr. Todd said, “The fact that you don’t have even Democrats storming the Capitol protesting — it’s not there.” Video Below

In ending, we leave you with an interview that Turning Point’s Benny Johnson conducted with an unknown female that he sarcastically labeled as ‘the best possible argument for Democrats impeachment ever captured on camera.”

This should help demonstrate the amount of impact that wall-to-wall impeachment coverage is having on potential voters.:

This is the best argument for Democrats impeachment ever captured on camera.

It pains me to say it – but this is a jaw-dropping argument I was never expecting.