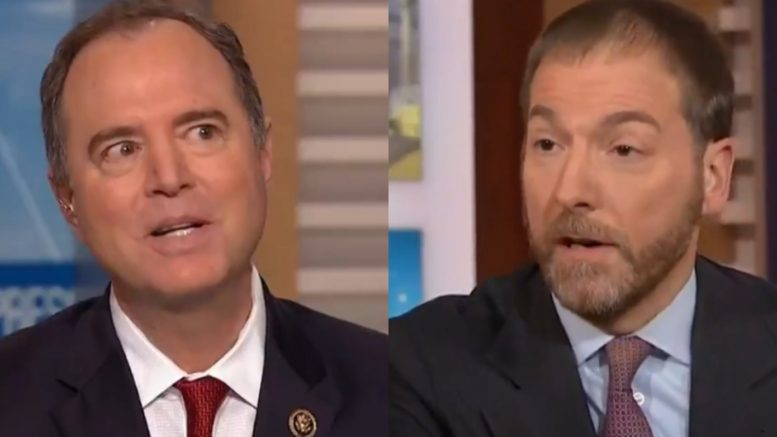 House Intel Chairman and Democrat impeachment manager Adam Schiff said he has no regrets about  past remarks he made on the “Russian collusion issue” or his opening statement where he made up parts of President Trump’s Ukrainian phone call transcript.

Schiff addressed both situations when pressed by MSNBC’s Chuck Todd on Sunday’s airing of Meet The Press.

Related Article: Sen. Barrasso: “The Blood Drained From Adam Schiff’s Face As They Played That Video & His Made-Up Words”

Mr. Todd told Schiff that he was “a star” of President Trump’s defense team as they began to make their case in front of the Senate on Saturday, primarily because of past implications he has made. Schiff was then asked if he regretted either of them.

“You were also a star of their defense as well, including, I think, an exchange you and I had about the Russian collusion issue as well as your opening statement on the phone call,” Todd said to Schiff. “Any regrets about either of those two moments yourself?”

Schiff replied, “No, and…I’m glad you asked the question about collusion because again they may be…perpetuating the President’s talking but they’ve got it exactly wrong.” Video Below

EXCLUSIVE: Rep. Adam Schiff says he does not have any regrets about his opening statement on the Ukraine phone call or his thoughts on the Russian collusion issue. #MTP #IfItsSunday@RepAdamSchiff: "You can't say it is an accident when you repeatedly are seeking foreign help." pic.twitter.com/AmJYwl3JT7

Later, Schiff implied there will be “no exoneration” without witnesses at the Senate trial.

We leave you with both of those video clips:

EXCLUSIVE: Adam Schiff says, even if the Trump defense team is “successful in depriving the country of a fair trial, there is no exoneration” #MTP #IfItsSunday@RepAdamSchiff: “Americans will recognize that the country did not get what the founders intended.” pic.twitter.com/vCB136XY68

"It is a false choice to say if the House gets to call witnesses doesn't the president." pic.twitter.com/rvrfRAL66r