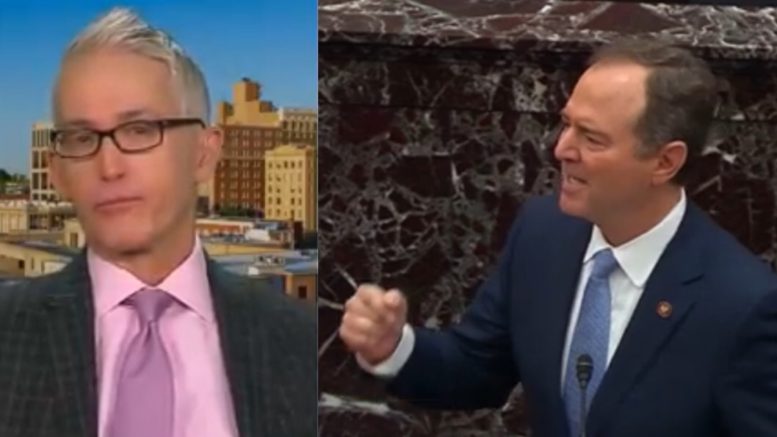 Asked what tactic the president’s counsel should take, Trey Gowdy began by saying that he would “let Jerry Nadler take all the time he wants to talk”.

He clarified: “Jerry Nadler’s trial strategy is to insult the jury”.

“I was in a lot of courtrooms, I never ever saw a prosecutor have as a strategy– let’s see what we can do to infuriate, alienate, and offend the jury,” Gowdy expressed.

Gowdy also said if he was on the president’s legal counsel team, he would “ask questions of Schiff and connect the process with substance.” (Continued Below)

“I would go line by line through that parody,” Gowdy said referring to when Schiff “made-up” his version of the July 25 phone call between President Trump and Ukraine’s president Zelensky.

“Why was that not good enough for you, Adam? Why did you have to make up– out of a whole cloth? I would also ask him is it never okay to investigate someone who is running for office?” Gowdy asked, which means according to Democrats’ logic, President Trump can’t be investigated, because he’s running for office. (Video Below)

“If Joe Biden were not a presidential candidate, if he were just like me and you, Maria, just a regular person, can you investigate them then? I mean, somehow this status of being a candidate means you’re off-limits? Gowdy wondered.