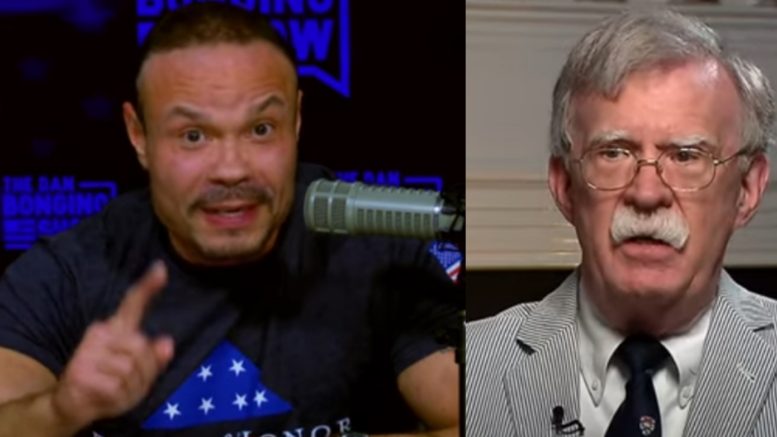 Dan Bongino knocked down the latest report by The New York Times regarding alleged leaks from John Bolton’s upcoming book.

The NYT reported that Bolton claimed in the book that President Trump linked aid held to Ukraine to an investigation into the Bidens.

“…The Times exclusively reported that Bolton’s manuscript included a claim that Trump explicitly linked a hold on Ukraine aid to an investigation of Joe and Hunter Biden. Trump told Bolton in August, according to a transcript of Bolton’s forthcoming book reviewed by the Times, ‘that he wanted to continue freezing $391 million in security assistance to Ukraine until officials there helped with investigations into Democrats including the Bidens.'”

NYT also reported that Bolton shared a manuscript of his upcoming book with ‘close associates’. However, Bolton’s team has since denied that claim, and have blamed the leak on the NSC’s review process, according to Fox News.

While the timing of the NYT’s report conveniently comes at a pivotal moment of the Senate impeachment trial, Dan Bongino leveled such claims with a swift, five-point smackdown.

“Regarding Bolton:
1) Nobody cares
2) The aid was delivered
3) The Ukrainians aren’t victims (just ask them)
4) The Democrats’ corruption in Ukraine is real
5) Nobody cares

Senior Legal Advisor of President Trump’s 2020 campaign, Jenna Ellis, followed up with Bongino’s tweet by saying, “The only people who care are the ringmasters of this #ImpeachmentCircus who are trying desperately at the 11th hour to extend their charade.” See Below

The only people who care are the ringmasters of this #ImpeachmentCircus who are trying desperately at the 11th hour to extend their charade. https://t.co/iRiYCgsCyp

Related Article: Chuck Todd On Senate Staffer’s Complaint That ‘Nobody Cares’ About Impeachment: “It’s Just Not There”

President Trump also responded to the latest alleged claims made by Bolton. We leave you with his reaction.

I NEVER told John Bolton that the aid to Ukraine was tied to investigations into Democrats, including the Bidens. In fact, he never complained about this at the time of his very public termination. If John Bolton said this, it was only to sell a book. With that being said, the…

…(Democrats said I never met) and released the military aid to Ukraine without any conditions or investigations – and far ahead of schedule. I also allowed Ukraine to purchase Javelin anti-tank missiles. My Administration has done far more than the previous Administration.