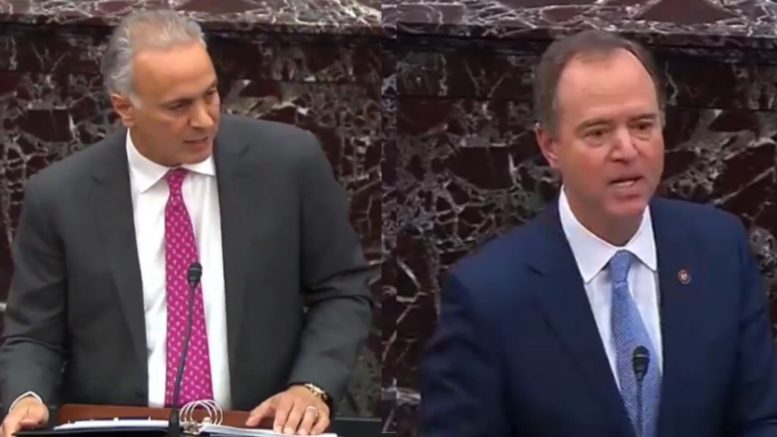 Eric Herschmann, an attorney for President Trump’s legal counsel, stepped to the podium Monday and ripped House manager Adam Schiff for making up his own rendition of the July 25 phone call between President Trump and Ukranian President Zelenksy.

“Remember the big transcript that manager Schiff read when he was before the Intelligence Committee?” Eric Herschmann asked the Senate. “His mob, gangster-like fake rendition of the call?”

“Well, I prosecuted organized crime for years,” he said. “The type of description of what goes on– what House manager Schiff tried to create for the American people is completely detached from reality.”

“It is as if we are supposed to believe that mobsters would invite people they do not know into an organized crime meeting to sit around and take notes to establish the corrupt intent,” Herschmann suggested. “Manager Schiff, our job as prosecutors, I know you were one, would have been a lot easier if that were how it worked.”

“Think about what he is saying, think about the manager’s position– that our president decided with corrupt intent to ‘shakedown’, in their words, another foreign leader, and he decided to do it in front of everyone in a documented conversation, in the presence of people he did not even know just so he could get this personal benefit that was not in our country’s interest,” he said.

Herschmann went on to say, “The logic is flawed, it is completely illogical, because that is not what happened. And that is why manager Schiff ran away from the actual transcript. That is why he created his own fake conversation.” (Video Below)

Adam Schiff making up a conversation:

Rep. Schiff re-writes the call transcript for added drama: "I’m going to say this only seven times, so you better listen good, I want you to make up dirt on my political opponent, understand, lots of it, on this and on that, I’m going to put you in touch with people" pic.twitter.com/1rV7BpEN6o