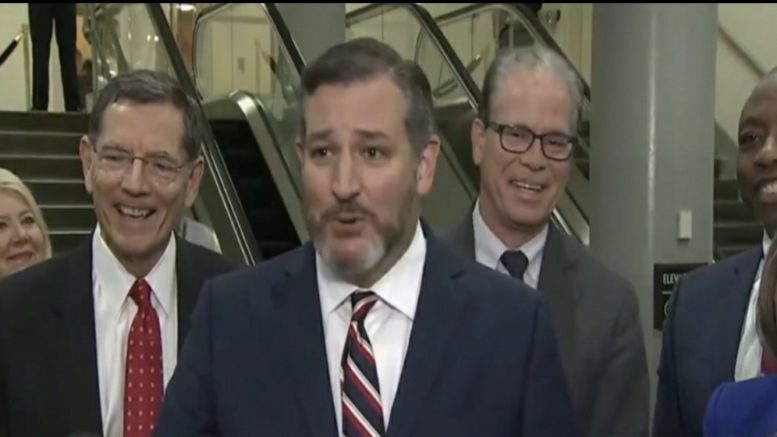 Senator Ted Cruz (R-TX) turned the tables on a reporter while discussing the case laid out by President Trump’s defense team at the Senate impeachment trial on Monday.

Cruz argued that President Trump did absolutely nothing wrong when asking Ukrainian leaders to investigate possible corruption carried out by former VP Joe Biden and his son Hunter.

“I get that the press loves to obsess over the latest bombshell,” Cruz said in reference to John Bolton’s manuscript leaks. “Listen, I don’t know what Bolton’s books says or doesn’t say. I’ve seen The New York Times’ coverage. But at the end of the day, it doesn’t impact the legal issue before this Senate.”

“The legal issue before this Senate is whether the President has the legal authority to investigate corruption,” Cruz continued. “The House managers built their entire case on the proposition that investigating Burisma corruption, investigating the Bidens for corruption was baseless and a sham … That proposition is absurd.”

“We’ve just seen two hours of evidence. And at a minimum, it was not only reasonable and justified, but the President, I think, had an obligation to investigate corruption that potentially extended to the very highest levels of government,” he asserted.

A disgruntled reporter then interrupted Cruz and said, “But senator, none of the president’s attorneys mentioned one single possible crime that Hunter or Joe Biden are accused of. Basically, what they said is Hunter Biden got a job, his dad was vice president. If that’s a crime, shouldn’t half of your children be in prison?” Video Below

As his colleagues laughed in disbelief of what they just heard from the reporter, Cruz responded, “My children are nine and 11. I’m sorry you want to throw a nine-year-old in prison. But at this point, my third grader plays basketball and softball at her school. So, stop playing that nasty Washington game.”

The reporter then replied, “That’s not a nasty Washington game.”

Cruz fired back, “Attacking a nine-year-old?” Video Below