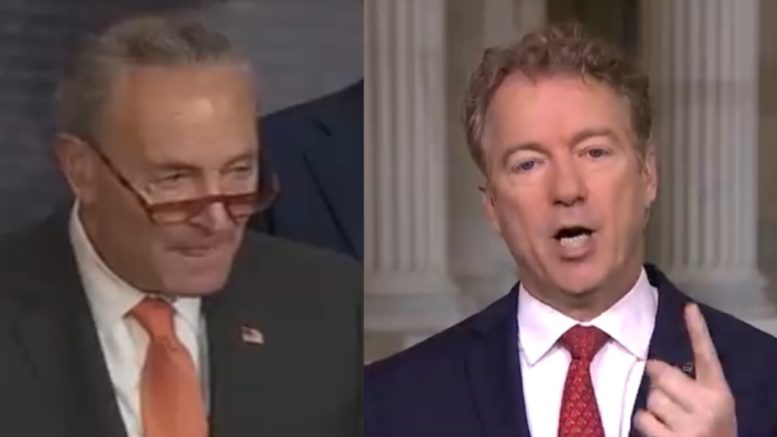 “You know, I’m offended and shocked that Schumer would be so scurrilous as to accuse the president and his children of making money illegally off of politics when the only people we know who have actually made money off of this have been Hunter Biden and Joe Biden,” Senator Rand Paul said.

“So Hunter Biden makes a million dollars a year, that’s documented, but Schumer simply creates and makes up and says, ‘Oh, maybe the president’s kids are making money.’ John Bolton is making money as we speak. He has probably already gotten the several million-dollar advance for this book. He’s making money by testifying against the president,” the Kentucky Senator continued.

“The only people we know who have actually made money: Hunter Biden and now, John Bolton. And they’re not objective–John Bolton is not objective in any way now that he’s cashing million-dollar checks. To have Schumer come up and say out of the blue, ‘Maybe the president’s kids are making money,’ with no evidence at all, that’s defamation and they ought to sue him,” he suggested.

Asked if it was a mistake that Schumer brought President Trump’s kids into the conversation, Senator Rand Paul replied, “It’s a transference. We’ve been talking all along about the president, [who] asked that corruption be investigated all along in Ukraine. And the evidence is out there that Hunter Biden was getting a million dollars, while his dad was busy firing the prosecutor that was going after Hunter Biden’s company. That’s all in the record. There’s nothing in the record about the president’s kids.” (Continued Below)

The Kentucky Senator believes that Schumer “has created this whole thing out of whole cloth”, adding, “He just completely made it up. That is defamation of character. He ought to go to court and be sued for it.”

(Related: Jay Sekulow: Dems “Opened Up The Door As Wide As A Double Door On The Hunter Biden, Joe Biden, Burisma Issue”)

Senator Rand Paul also said that Hunter and Joe Biden are “accused of corruption” in Ukraine. “If the president was investigating corruption and the Biden’s were corrupt, [Trump] was doing his job. If there’s no evidence the Bidens were corrupt, not one scintilla as the Democrats say, let’s have a full airing of that,” he recommended. (Video Below)